America’s Pop Music Hall of Fame launched in 2012 with a list of 40 nominees for potential induction. To be eligible for the Hall, an act must have charted between 1946 and 1975. There’s no indication of what chart – the site simply says “national charts.” An actual structure for the Hall was supposed to open in a modest 3000-square foot space in Canonsburg, Pennsylvania (just outside Pittsburgh) in time for the first ceremony, but as of this post, that had yet to happen. The city, which boasts native sons Perry Como and Bobby Vinton, calls itself the country’s “small town musical capital.” Here are the inductees from 2013 to 2017:

Posted by Dave Whitaker at 1:01 AM No comments:

Posted by Dave Whitaker at 10:03 PM No comments: cover for Top 100 Songs of the Pre-Rock Era book

This is a companion book to The Top 100 Songs of the Rock Era, 1954-1999, available at DavesMusicDatabase.com as a standard book or ebook!

When I was in the beginning stages of The Top 100 Songs of the Rock Era, 1954-1999, the intent was to write a “top 100 songs of all time” book. As I quickly discovered, most lists which proclaimed to offer the best of all time are really focused on the latter half of the second century. I decided to retool my project to focus on those years with the idea that I would later roll out another book focused on the pre-rock era.

That book is still in the works, but I thought I’d roll out the list as it stands now as a teaser. As always with DMDB lists, the rankings are determined by aggregating multiple best-of lists and factoring in songs’ sales, chart stats, and awards. It should be noted that in the pre-rock era there were often multiple versions of a song. In fact, some best-of lists did not list a specific version. When the latter occurred, all versions of a song were given points. Once all points were compiled, only the top version of a song was included in this list. 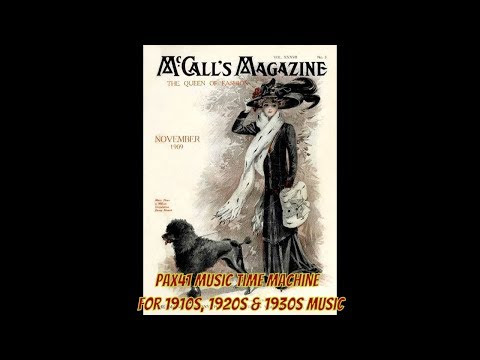 Posted by Dave Whitaker at 5:21 AM No comments: 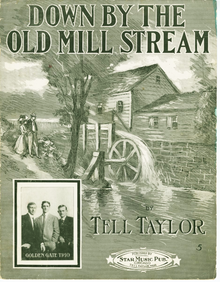 Harry MacDonough “Down by the Old Mill Stream”

Review: With hundreds of songs under his belt, Tell Taylor was “one of the powerhouses in musical composition during the early 20th century,” PS but of all his songs, probably none is more familiar than “Down by the Old Mill Stream.” He wrote it in 1908 while sitting on the banks of the Blanchard River in Ohio, WK although it has been reported that it was modeled on “Down by the Old Stream,” a Joseph P. Skelly song from 1874. SS-436 The lyrical focus is on someone older looking back on a lifelong romance, but true to form for post-1900 songs, it focuses more on reality than sentiment. SS-436

Musically, MacDonough’s version was unique in that he sang the first half with an orchestra, but then the orchestra is replaced by a quartet – most likely the Haydn Quartet, of which MacDonough was a member. The rest of the song is then handled a cappella by the quartet. SS-436 That combination of four-part harmony alongside the “beautifully flowing melody with romantic lyrics” PS made the song a barbershop quartet favorite RCG and arguably the song that defines that genre. PS

The song was one of only four from 1890-1954 to sell 5 million in sheet music. PM-634 One of those, “Let Me Call You Sweetheart,” shares other traits with “Stream.” Both songs were published in 1910 and first charted in 1911. The first chart versions of each were by Arthur Clough. Usually the first charted version of a song was the biggest, but the Peerless Quartet and Harry MacDonough each topped the chart for seven weeks with, respectively, their recordings of “Sweetheart” and “Old Mill Stream,” leaving poor Arthur Clough the dubious distinction of also-ran status – twice.

“The song was originally published with not only the piano version but also with an arrangement for male vocal quartet.” PS The song resurfaced in the 1936 film Her Master’s Voice JA-51 and the Mills Brothers revived the song in the 1940s “with a more swinging style to it.” RCG In 1965, Alvin and the Chipmunks recorded the song and Snoopy played the song in the 2000 animated special It’s the Pied Piper, Charlie Brown. WK

Posted by Dave Whitaker at 9:07 PM No comments: