The Arctic Monkeys' debut hits #1 in the UK

Email ThisBlogThis!Share to TwitterShare to FacebookShare to Pinterest
Labels: Alex Turner, Arctic Monkeys, best albums 21st century book, best albums all time, Brit Award, I Bet You Look Good on the Dancefloor, Mercury Prize, Whatever People Say I Am That's What I'm Not 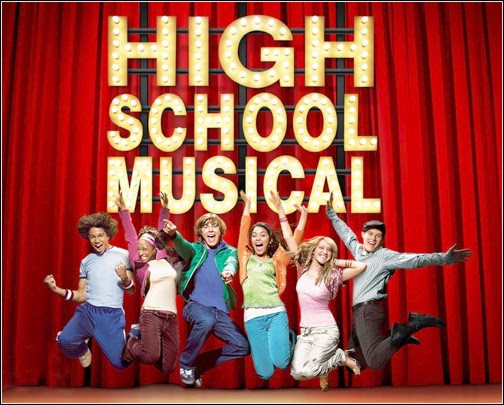 Disney “struck platinum with High School Musical, a made-for-cable movie that was mega-popular on the Disney Channel before spawning a mega-popular soundtrack. Echoing Grease, the plot involves two students” EV who meet at a New Year’s Eve party while their families are on vacation at a ski lodge over winter break. “During a karaoke contest at the teen party, they discover their love for singing... and an interest in each other.” AZ However, Gabriella (Vanessa Hudgens) is a “shy transfer student who excels in math and science” WK and Troy (Zac Efron) is the captain of the basketball team. When they discover they go to the same high school, they try out for the lead parts in the high school musical “and challenge the status quo of their cliques in the process” HP as they “resist peer pressure and rivalry, inspiring others along the way not to ‘stick to the status quo’.” WK

“The movie’s soundtrack isn’t exactly challenging;” HP “the songs are typical Disney pop: on the bland side but also very well-crafted.” EV “It does feature a pretty engaging mix of music and empowering messages, most of which can be found in earnest ballads such as Start of Something New, When There Was Me and You, and Breaking Free. Meanwhile, We’re All in This Together sets lyrics like ‘Everyone is special in their own way/ We make each other strong’ to music inspired by ‘Hollaback Girl’s marching-band/cheerleader motif.” HP


“Among the standouts are Get’cha Head in the Game, which incorporates” EV “an urban pop melody” HP with “noises from a basketball game (squeaking sneakers, bouncing balls, whistles) to great effect.” EV There’s also “the fab tribute to 1970s piano-pop What I’ve Been Looking For” EV which “flirts with satire” HP because its “melody is so bright and the vocals so relentlessly cheery, it sounds like a parody of a show tune.” HP It is “sung by the theater kids who are threatened by these upstarts from other cliques invading their territory.” HP Similarly, the “big chorus” HP on “the old-school show-tuney Stick to the Status Quo” EV “urges everyone to just ‘go with the flow’.” HP


“The music falters” EV when it “comes closer to sounding like the usual teen pop product issued by Disney, especially on I Can’t Take My Eyes Off of You and the Latin-flavored Bop to the Top.” HP “Still, the album has enough personality to set it apart from the status quo of the studio’s other releases” HP and can “get kids to bounce and sing along nicely.” EV

LaShonda Barnett, author of I Got Thunder: Black Women Songwriters and Their Craft, wrote that the “authenticity, the emotional honesty and the vulnerability Blige reveals in her music” SF have much to do with many people calling Blige “our generation’s Aretha Franklin.” SF Indeed, “nobody knows heartache like Mary J. knows heartache.” TL Throughout her career, Blige has delivered dramatic “songs steeped in heartbreak and disappointment.” AK

Her seventh album, The Breakthrough, “features the best round of productions Blige has been handed since the mid-‘90s.” AK “Blige and producers Dr. Dre, Jimmy Jam, Terry Lewis, and Will.i.am tasked themselves with stirring a river of hurt into some of the highest-caliber hip-hop/soul to hit the airwaves since she burned up the Waiting to Exhale soundtrack with ‘Not Gon’ Cry’.” TL

The album’s lead single, “Be Without You”, became Blige’s biggest hit to date. It was her fifth Billboard R&B chart topper, peaking on that chart the same week The Breakthrough debuted atop the Billboard 200 album chart. “Without You” spent 15 weeks at the summit, making it the chart’s biggest hit in nearly 60 years. The last song to spend more weeks at #1 was Louis Jordan’s “Ain’t Nobody Here But Us Chickens” with 17 weeks in 1947. With a massive 75 weeks on the R&B chart, “Without You” also became the champion for most weeks total. WK

The song and album garnered Blige some Grammy gold. “Without You” won for Best R&B Song and Best Female R&B Vocal Performance and was also nominated for Record and Song of the Year. The Breakthough won a Grammy for Best R&B Album.


Awards for “Be Without You”: Awards for The Breakthrough: Resources and Related Links:
at January 07, 2006 No comments: