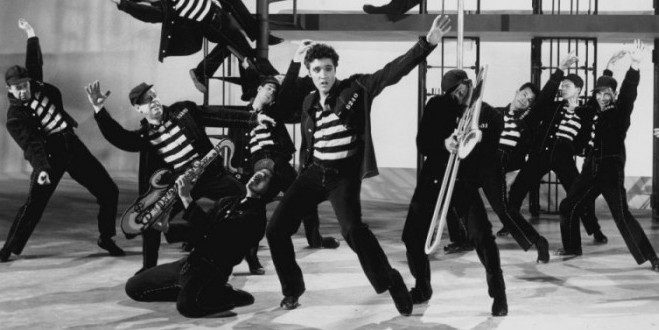 Review: As bad as Elvis movies could be, the songs that soundtracked them were often worse. Still, Elvis had “his celluloid moments” and perhaps never better than in Jailhouse Rock. HL-88 Jerry Leiber and Mike Stoller, “the first important non-performing songwriters of the rock era,” TB-31penned the prison songs for The King’s third movie. It was their first movie score, SF but the pair were known for their R&B hits, one of which was the jail-themed “Riot in Cell Block #9” by the Coasters. CR-706 They’d also written a couple of Presley hits already – most notably “Hound Dog”, first recorded by Big Mama Thornton. RS500

Leiber and Stoller’s score “was perfect” but nothing could match the energetic title song. HL-88 Inspired by “Comeback” by Memphis Slim, KL-47 “Jailhouse Rock” sported a tongue-in-cheek nature on par with the Coasters’ material. However, Elvis ignored the lyrical jokes, such as the gay-prisoner-themed line about one inmate telling another “You’re the cutest jailbird I ever did see” and “sang it as straight rock & roll.” RS500

As for the dance routine involving dancing convicts in their cells, it was choreographed by Elvis himself, BR1-29 making it his only full-fledged example of such work in one of his movies. HL-88 It is often cited as an early influence on the development of music video. JA-108

The song was a huge hit, topping the U.S. pop, R&B, and country charts. It was the first #1 debut in the UK charts. While common today, it was considered impossible at the time. HL-89 It returned to the peak in January 2005 when released to commemorate Presley’s 70th birthday, making it the oldest single top ever top that chart and one of three to top that chart twice. The other two, also released posthumously, were Queen’s “Bohemian Rhapsody” and George Harrison’s “My Sweet Lord.” SF

Posted by Dave Whitaker at 12:05 AM No comments: Links to this post

Above track listing based on 2000 Decca reissue. Songs with an asterisk (*) are on original 1946 cast album.

Posted by Dave Whitaker at 8:31 AM No comments: Links to this post