U2 gave a career-making performance of “Bad” at Live Aid

On July 13, 1985, an estimated 1.9 billion people in 150 nations watched the broadcast of Live Aid. It “was the most ambitious international satellite television venture that had ever been attempted at the time“. WK Musicians Bob Geldof and Midge Ure organized the star-studded concerts, held simultaneously in London’s Wembley Stadium and Philadelphia’s John F. Kennedy Stadium. The two venues attracted 72,000 and 100,000 fans respectively.

Geldof, best known for the U.K. #1 song “I Don’t Like Mondays” with his group the Boomtown Rats, was dismayed by the plight of starving Ethiopians after seeing a BBC documentary. Determined to make a difference, he had assembled some of Britain’s biggest musical stars the previous winter for the charity recording “Do They Know It’s Christmas?”, written by Geldof and Ure. The song became, at the time, the best-selling record ever in the UK. HE 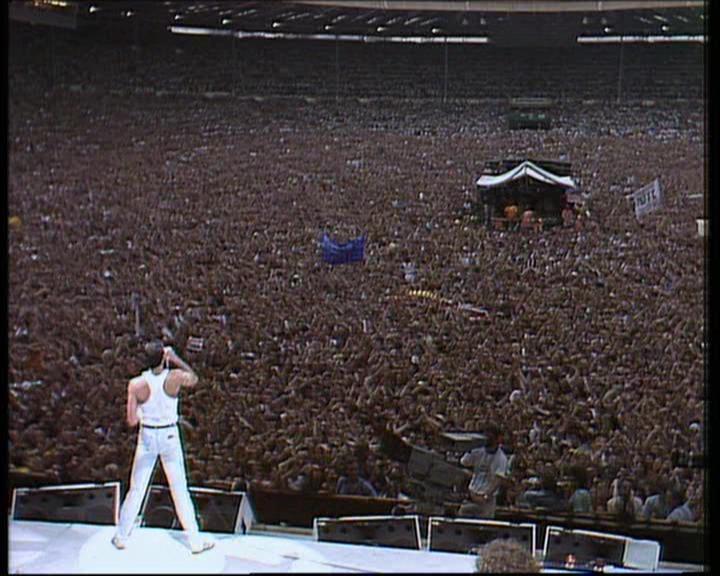 Also of note were Paul McCartney’s performance of “Let It Be”, followed by an all-star gathering to close out the London concert with “Christmas”. Stateside, the concert closed with the U.S. response to that song, USA for Africa’s “We Are the World”.

A planned duet between Mick Jagger and David Bowie – one on each coast – had to be scrapped because it was too complicated. Instead, they recorded a duet version of Martha & the Vandellas’ “Dancing in the Street” and the video was shown at both venues. Phil Collins made news by performing at both venues. He hopped a Concorde after his Wembley appearance and jetted overseas to Philadelphia.