Chris Martin, the lead singer of Coldplay, reportedly got his inspiration for this song from the yellow pages phone book. AB’00 Martin said, “It was simply because that word sounded nice, it just seemed to fit, no other reason. None of the other colors would have sounded right really!’” SF

This was the American market’s introduction to Coldplay and “Martin’s unique dreaminess.” RS’09 As Rolling Stone said, “Has any band had a better line for their first single than ‘Look at the stars, see how they shine for you’?” RS’09

The song tells a familiar tale of unrequited love, although Martin has said it could be brotherly love and not necessarily romantic devotion. SF While a simple song, it is elevated by the “romantic, spiraling boy-wail” TB of Martin’s “killer falsetto in the bridge” TB and the unusual move of closing with the same chords as played throughout, but switching them from major to minor. TB

In addition, a bare-bones emphasis on “the song’s sheer quality ensured classic status for the video.” TB Only Martin was featured in the video as his Coldplay cohorts attended the funeral of mother of Will Champion, the band’s drummer. Since it was shot at a fast shutter speed to achieve a slow motion effect, Martin had to lip-sync to the song played at twice its normal speed. SF

Martin used to change the song’s melody while performing it, but R.E.M.’s Michael Stipe told him, “’Stop doing that. People want to hear the songs the way they know them.’” SF

In Concert: Sting and Tracy Chapman 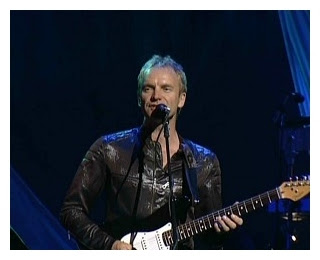