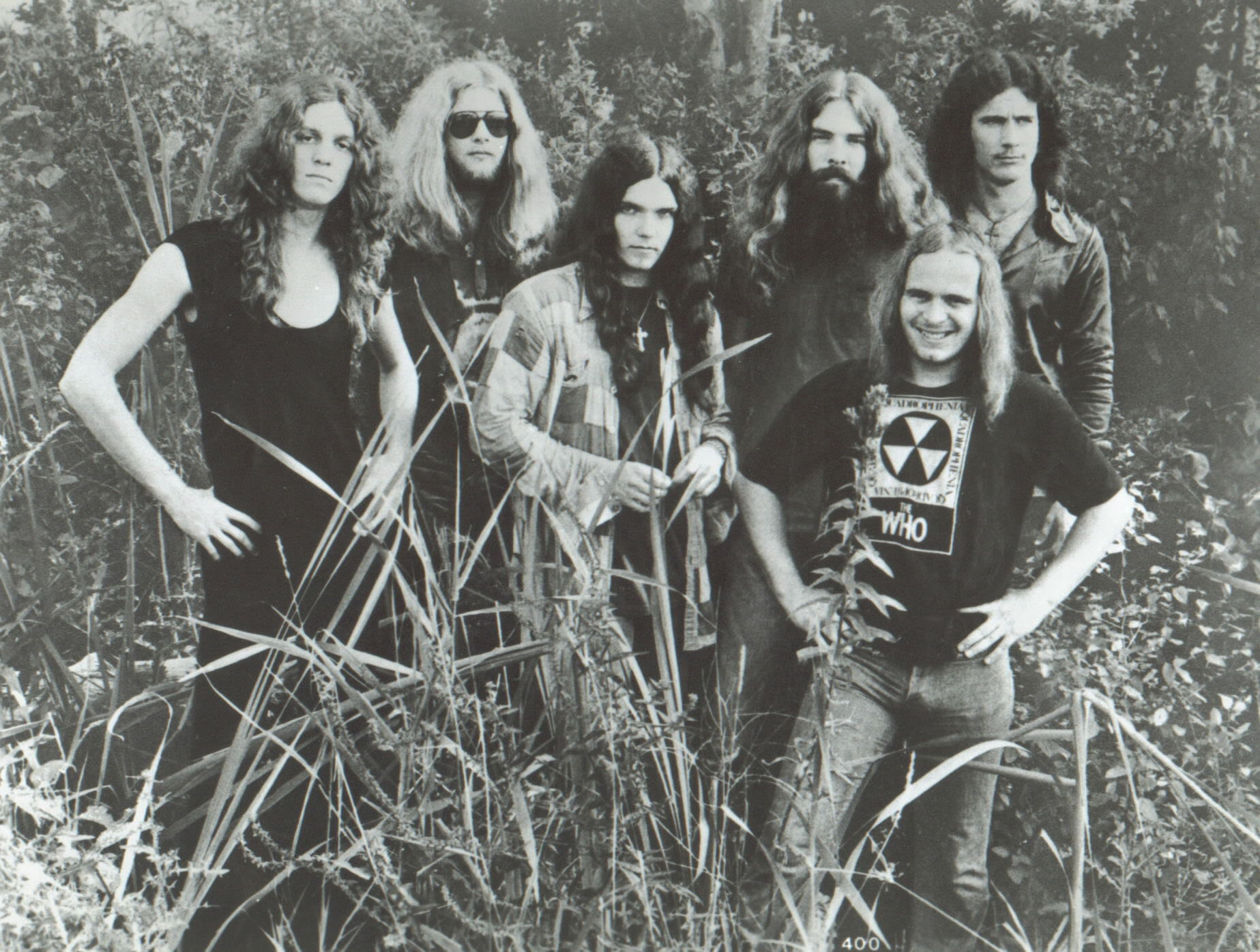 On October 27, 1977, the rock world suffered one of the most tragic losses in music history when a twin-engine, propeller-driven Convair 240 plane crashed in a wooded area near Gillsburg, Mississippi. The chartered plane out of Texas carried the members of Southern rock group Lynyrd Skynyrd. They were headed from a Greenville, South Carolina, show to another in Baton Rouge, Louisiana.

The reported cause of the crash was fuel shortage. Of the 26 passengers on board, six were killed. They included Lynyrd Skynyrd’s singer Ronnie Van Zant, guitarist Steve Gaines, and his sister and backup singer Cassie Gaines. They were all 28 years old. The group’s assistant road manager, Dean Kirkpatrick was also among the dead. Walter Wiley McCreary and William John Gray, the pilot and co-pilot, were also killed. Others were critically injured.

Lynyrd Skynyrd formed in Jacksonville, Florida, when Van Zant played in high school with Gary Rossington and Allen Collins. They named their band after the Robert E. Lee High School’s physical education instructor Leonard Skinner as a means of getting even. He was not a fan of long hair and loud music and he played a hand in getting them suspended from school.

Posted by Dave Whitaker at 10:48 PM No comments: Links to this post

Review: “There is no other album like Bat Out of Hell, unless you want to count the sequel.” AMG “Nobody else wanted to make mini-epics like this.” AMG This collection of songs makes for “one of rock’s most theatrical, grandiose records” RS and one of the genre’s “least likely hit albums.” AZ It is “overwrought and undeniable;” AZ “epic, gothic, operatic, and silly – and it’s appealing because of all of this.” AMG “It’s rock as soap opera.” PR

Meat Loaf, born Marvin Lee Aday, had alternated between recording music and appearing on stage through the late ‘60s and early ‘70s. He starred in the musical More Than You Deserve, written by the classically-trained pianist Jim Steinman, after which the pair decided to work on a musical album project based on Peter Pan. It evolved into the Bat Out of Hell album. TB

As a composer, Steinman drew on the “pomp and circumstance of Richard Wagner” TB and subscribed to the same principle which “made Andrew Lloyd Webber a multimillionaire knight: if you do kitsch, do it big.” AZ “There never could have been a singer more suited for [Steinman’s] compositions than Meat Loaf, a singer partial to bombast, albeit shaded bombast.” AMG In addition, Todd Rundgren “gives Steinman’s self-styled grandiosity a production that’s staggeringly big but never overwhelming and always alluring.” AMG

The songs on Bat Out of Hell are fused with “sentiments are deliberately adolescent and filled with jokes and exaggerated clichés.” AMG This is “the sound of the American dream slipping into a coma as images of drive-in movies, teenage sexual fantasies and motorbike mythology flash before its eyes.” PR “It may be easy to dismiss this as ridiculous, but there’s real style and craft here and its kitsch is intentional.” AMG “There’s real (albeit silly) wit behind these compositions” AMG and “Meat Loaf finds the emotional core in each song, bringing true heartbreak to Two Out of Three Ain't Bad and sly humor” AMG to “the breathless nookie-quest [of] Paradise by the Dashboard Light,” AZ complete with “baseball announcer [Phil Rizzuto] to narrate the backseat hookup.” CS

Paradise by the Dashboard Light

The album “often gets compared to [Bruce Springsteen’s] Born to Run.” CS Bat has “Springsteen-esque narratives,” AMG “the same small-town themes, epic production, and even personnel [E Street Band members Max Weinberg and Roy Bitten] but where Born to Run provides a nuanced look at the trials and triumphs of kids bursting out of small town America, Meat Loaf throws subtlety out the window. Everything here is bigger. Bat Out of Hell turns ‘Born to Run’ into a 10-minute roar, throwing motorcycle sound effects and ‘Leader of the Pack’ melodrama into the pot.” CS

In addition, this is musically “a savvy blend of oldies pastiche, show tunes, prog rock…and blistering hard rock (thereby sounding a bit like an extension of Rocky Horror Picture Show, which brought Meat Loaf to the national stage).” AMG “It’s hard not to marvel at the skill behind this grandly silly, irresistible” AMG and “brassy, brash and over the top” ZS “megaselling, megabombastic mega-album.” RS “There are only a small number of records that fall into the ‘essential rock album’ category, and this is definitely one of them.” NO

Two Out of Three Ain’t Bad

This was Joel’s fifth album and “is generally regarded by critics as his magnum opus.” WK It is also his best-selling studio album to date. WK His “breakout LP came years after he first hit the charts with the novelty-ish ‘Piano Man’” DH and after four moderately successful albums. However, his previous albums “blunted interesting songs with a sound that was neither Elton mellow nor Elton attitude.” DH For The Stranger, “Billy Joel teamed with Phil Ramone, a famed engineer who had just scored his first producing hits with Art Garfunkel's Breakaway and Paul Simon’s Still Crazy After All These Years.” STE


“Joel still favored big, sweeping melodies, but Ramone convinced him to streamline his arrangements and clean up the production. The results aren’t necessarily revelatory, since he covered so much ground on Turnstiles, but the commercialism of The Stranger is a bit of a surprise” STE for “those who had written Joel off as a one-hit wonder.” DH “None of his ballads have been as sweet or slick as Just the Way You Are,” STE which won Grammys for Record and Song of the Year. In addition, Joel “he never had created a rocker as bouncy or infectious as Only the Good Die Young; and the glossy production of She's Always a Woman disguises its latent misogynist streak.” STE


“Joel balanced such radio-ready material with a series of New York vignettes, seemingly inspired by Springsteen’s working-class fables and clearly intended to be the artistic centerpieces of the album. They do provide The Stranger with the feel of a concept album, yet there is no true thematic connection between the pieces, and his lyrics are often vague or mean-spirited.” STE


The title song is marked by a “signature whistle line” WK which Joel initially intended just as a fill-in until, as he told Ramone, he found the right instrument to play in its place. Ramone’s response: “No, you don’t. That’s ‘The Stanger,’ the whistling.” WK


“His lyrical shortcomings are overshadowed by his musical strengths. Even if his melodies sound more Broadway than Beatles – the epic suite Scenes from an Italian Restaurant feels like a show-stopping closer – there’s no denying that the melodies of each song on The Stranger are memorable, so much so that they strengthen the weaker portions of the album.” STE


“Joel rarely wrote a set of songs better than those on The Stranger, nor did he often deliver an album as consistently listenable.” STE The Stranger “remains a solid introduction to Joel's restless muse at a crucial point in his career.” DH The album invites some “comparisons to Bruce Springsteen” DH but in “a lower middle-class (Eastern Urban) setting, but Joel’s chameleonic, formalist approach to pop wasn't to be so easily pigeonholed.” DH

Posted by Dave Whitaker at 3:35 PM No comments: Links to this post

Email ThisBlogThis!Share to TwitterShare to FacebookShare to Pinterest
Labels: Billy Joel, Just the Way You Are, Movin' Out, Only the Good Die Young, Phil Ramone, Scenes from an Italian Restaurant, She's Always a Woman, The Stranger
Newer Posts Older Posts Home
Subscribe to: Posts (Atom)