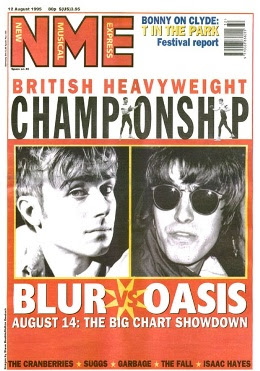 1995 marked the pinnacle of Britpop in the U.K. The genre emerged from the British independent music scene in the early ‘90s and has been suggested to be the English response to the rise of grunge in the U.S.A. The form was characterized by its guitar-driven pop sound which recalled some of the country’s biggest bands from the 1960s and 1970s such as The Beatles and The Kinks. Groups from the 1980s and early 1990s such as The Smiths, The Stone Roses, and Happy Mondays were considered immediate predecessors to the movement. In the U.S., the genre was understandably less prevalent but many of the bands labeled as Britpop found homes on American alternative radio.

The genre’s two most popular bands were Blur and Oasis. In 1995, the former group was coming off the success of their highly acclaimed album Parklife while the latter band was coming off Definitely Maybe, which had set the record for the country’s fastest-selling debut album.

Both groups were prepping their follow-up albums and had grown antagonistic toward each other in the last year. By the time they were ready to release their new singles, the record companies made the most of the marketing opportunity and released the singles (“Country House” for Blur, “Roll with It” for Oasis) on the same day.

The release date, August 14, was cited by NME magazine as the day of the big chart showdown – or “The Battle of Britpop” as it was commonly referred to by the press. However, it wasn’t until the official UK chart for the week ending August 26, 1995, that an official winner could be declared. Blur debuted at #1 on the chart with 274,000 copies while Oasis’ sales of 216,000 landed them at #2. However, while Blur won the battle, Oasis won the war. Their album (What’s the Story) Morning Glory? became the third-best-selling album in British history and found much greater success in the U.S. than Blur.