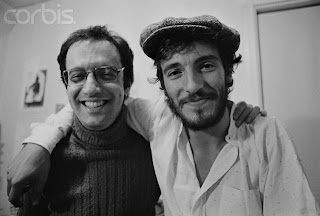 38 years ago, then-writer Jon Landau wrote one of the more famous lines of rock and roll journalism: “I saw rock and roll future and its name is Bruce Springsteen.” The line referenced a concert he’d seen the Thursday before at the Harvard Square theatre where Springsteen opened for Bonnie Raitt. He also said of the two-hour set, “Can anyone really be this good; can anyone say this much to me; can rock ‘n’ roll still speak with this kind of power and glory?” He answers with a resounding “yes” saying, “Springsteen does it all” and later “there is no one I would rather watch on stage today.”

Interestingly, Springsteen isn’t really the focus of the article. Springsteen’s name doesn’t show up until after the halfway point. At the grizzled age of 27, he reminisced about jamming with friends and listening to records as a freshman in college. He noted classics like Dionne Warwick’s “Walk on By,” the Drifters’ “Up on the Roof,” Wilson Pickett’s “In the Midnight Hour,” and Otis Redding’s “Respect.” He said, “Others enjoyed drugs, school, travel, adventure. I just liked music: listening to it, playing it, talking about it.”

I can relate. Other than my family (and they might complain they rank second) nothing consumes my time and attention more than music. When it comes to favorites, I cite Marillion as my favorite band and Kevin Gilbert as my favorite singer. They both have that proper “who’s that?” quality that makes me appear more in touch with music than the average person. However, when it comes to mainstream music, no one gets me as enthused as Springsteen. I became a fan in high school when Born in the U.S.A. was taking over the world. I’ve eagerly awaited every album he’s done since, lapping them up as soon as they’re released, absorbing them, and then walking away with a couple new favorites to add to The Boss’ already-ripe canon.

When Landau wrote his “Growing Young with Rock and Roll” article, Springsteen had two going-nowhere albums under his belt with Greetings from Asbury Park, N.J. and The Wild, the Innocent, & the E Street Shuffle. Columbia Records had already lost $150,000 on those records and while Springsteen had a devoted local following, there seemed to be little chance he’d become a star. However, Columbia trumpeted Landau’s endorsement in full-page ads. While the original article appeared in The Real Paper, a weekly Boston newspaper which ran from 1972 to 1981, Landau had established a significant readership, having written for Rolling Stone, lending his craft to their very first issue in 1967.

More importantly, Landau joined Springsteen’s management team before year’s end. He co-produced Springsteen’s career-making album, 1975’s Born to Run and stayed on board with Springsteen ever since. Landau currently heads the nominating committee for the Rock and Roll Hall of Fame.