And This Year's Rock and Roll Hall of Fame Inductees Should Be...

So who has been unfairly overlooked? If the DMDB was in charge of the 2012 inductees, these would be the five to get in. Note: click on acts’ names to see their entries in the DMDB music makers’ encyclopedia.

In February, I wrote a blog entry entitled Why Kiss Belong in the Rock and Roll Hall of Fame. I’m actually not a Kiss fan, but my argument is that it is impossible to overlook a band that is the embodiment of rock and roll. The popular criticism is that the band uses elaborate stage shows to mask an absence of substance. They may appeal to the crotch, but not the head. Any self-respecting adult would have long ago purged their collections of any traces of the group. Uh, note to the Rock Hall – apparently you’ve forgotten how much of rock and roll is about music which appeals to young adults because it is all about sex and over-the-top showmanship. By the way, once Kiss gets in, make way for the New York Dolls, Judas Priest, and Iron Maiden. That also opens the door to hair bands. Most worthy of induction are Bon Jovi and Def Leppard.

Earlier this month, I wrote a blog entry about Parsons (Country-rock pioneer Gram Parsons died: September 19, 1973). That offers a brief overview of Parsons’ contributions. To sum it up here, writer Radley Balko argues that “Parsons may be the most influential artist yet to be inducted in either the Rock and Roll or Country Music Hall(s) of Fame”. The man who has been called “The Father of Country Rock” has four DMDB top 1000 albums – his own G.P. and Grievous Angel as well as The Byrds’ Sweetheart of the Rodeo and The Flying Burrito Brothers’ Gilded Palace of Sin. Groups like the Eagles and Poco owe their very existence to the foundation he helped build.

Rufus over Rush? The Hall has rightly acknowledged many R&B acts who have significantly shaped rock and roll. In its first two years, the Hall inducted Ray Charles, James Brown, Sam Cooke, Aretha Franklin, Marvin Gaye, and Louis Jordan. However, years after the R&B base has been more than acknowledged, the Hall continues to hail R&B acts (the 2012 nominees include Rufus, The Spinners, War, and Donna Summer) at the expense of acts which have been rock first and foremost. This is glaringly apparent when it comes to progressive rock. The Hall has an obvious bias against it, having only inducted Genesis from the genre. Still failing to receive acknowledgement are Rush; Yes; King Crimson; Jethro Tull; The Moody Blues; and Emerson, Lake & Palmer. All of these acts are worthy, but if I could only pick one, I’d go with Rush as the act who best transcended the genre to appeal to hard rock and heavy metal audiences as well.

The Cure gets a nod this year and I think they are worthy of Hall induction – but not before Joy Division. These two groups most define the genre of goth rock, but Joy Division got there first. In a previous blog entry, I called them “one of the most important post-punk bands for creating the template for goth music” (Joy Division’s “Love Will Tear Us Apart charts: June 28, 1980). They only released two studio albums and gained a much wider audience in their re-incarnated-as-New Order form, but in launching goth rock, Joy Division also laid the platform on which much of ‘80s alternative rock – including The Cure – was formed. While we’re focused on groups who laid the foundation for the alt scene, The Smiths and Sonic Youth belong on the short list of acts which should be ushered in right after Joy Division.

There’s still plenty of others worthy of Hall attention. I seriously considered giving this fifth spot to an artier, influential band like Kraftwerk, Roxy Music, Big Star, or Captain Beefheart. There’s also a serious case to be made for Stevie Ray Vaughan, that rare artist who moved an entire genre (the blues) forward while paying homage to its roots. However, the biggest and baddest act left deserving of enshrinement is Deep Purple. This would give the 2012 class a real dose of something the Hall has too long neglected – ROCK AND ROLL. What rock fan wouldn’t salivate at the idea that Deep Purple, Kiss, and Rush could all share a stage that night? The idea of a post-jam celebration including “Hush”, “Rock and Roll All Nite”, and “Tom Sawyer” just boggles the mind.

Resources and Related Links:
at September 28, 2011 No comments:

September 27, 2011: The Rock and Roll Hall of Fame announced its nominees for the 2012 class. They are Beastie Boys, The Cure, Donovan, Eric B. & Rakim, Guns N’ Roses, Heart, Joan Jett & the Blackhearts, Freddie King, Laura Nyro, Red Hot Chili Peppers, Rufus/Chaka Khan, The Small Faces/The Faces, The Spinners, Donna Summer, and War. An act is eligible 25 years after the release of its first album or single. The nominating committee is comprised of 40 critics and music experts. Then ballots are sent to 500 critics who vote to determine at least 5 of the 15 nominees to be inducted. Those will be announced in November.

The 15 nominees have been ranked by Dave’s Music Database (number in parentheses after act). This is based on several criteria, including overall DMDB rating, rankings from Notinhalloffame.com (a website which has ranked 500 acts not yet voted into the Hall), and the act’s current induction chances as predicted by FutureRockLegends.com. Included with each act is commentary from both sites. Click on acts to link to their Rock Hall bios.

“Many bands have a broad appeal and it is easy to figure out why. Guns N’ Roses exploded on the scene in the late 80’s and despite their dirty look and harsh Metal sound they became instant International Superstars; despite not subscribing to the traditional formula.” NH As FutureRockLegends.com (FRL) says, “See you in Cleveland.” F1

“The NIHOF committee couldn’t agree on very much unanimously… [but thought] The Red Hot Chili Peppers was as almost as close to a lock to being a first ballot inductee to the Hall. We were wrong, but we don’t think their wait will be a long one.” NH They “will inevitably be inducted. It’s just a matter of when.” F1

“It’s mystifying why they haven’t been inducted yet. They have some of the strongest credentials of any eligible artist.” F1 “Eventually as more Rap and Hip Hop artists become eligible for Rock and Roll Hall of Fame induction, we suspect that our future NIHOF lists will be populated with them. Until then, we will have to settle for the few we do have, and our next selection, The Beastie Boys seems like a great place to start in respect to the genre.” NH

“Interesting nomination. Certainly fills a void on recent ballots, but it seems highly unlikely they’ll be inducted this year. Also in line for this ballot slot, The Smiths and Joy Division / New Order.” F1 However, The Cure may personify “the gothic image of a band (who ironically despised that label) better than any other group on this list.” NH

“We don’t have a problem admitting that at NIHOF we don’t have any issue with (and sometimes quite enjoy) the Disco genre. We aren’t sure what the Rock and Roll Hall of Fame thinks though. The Bee Gees are in, and they are constantly trying to get Chic in, but what of the woman most closely associated with Disco, Donna Summer?” NH FRL says to expect her to “be nominated again next year, because she won’t make it again.” F1 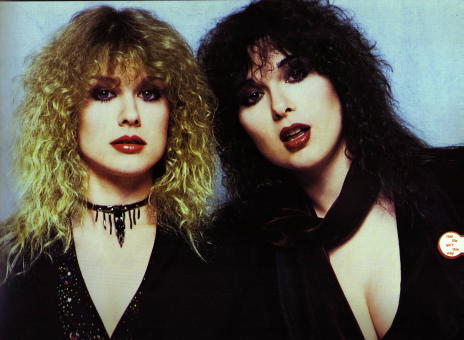 “Seattle will be well represented as the Grunge era becomes Hall of Fame eligible. Until then, we think the Pacific North West has good representative in our top fifty with the Wilson sisters, A.K.A., Heart.” NH “Great to see Heart make the ballot after waiting 10 years. They recently made an appearance at the Rock Hall Museum as part of the ‘Women Who Rock’ exhibit.” F1

“The Rock and Roll Hall of Fame contains many an artist flying the Motown flag. Motown certainly became a star making label and under their label many legends were born. With that being said meet The Spinners, a band on this list who actually became stars once they left Motown.” NH FRL says “It seems likely that they will be ushered in quickly by the Voting Committee, who has probably been waiting for a chance to vote for them for years.” F1

“The United States of America has often touted itself as the ‘Melting Pot’ of the world. We will let some other website debate the validity of that statement. For now, we will simply slot the ironically named band, War as the band on our list that we think best serves the Melting Pot analogy.” NH As for getting in, there was “not a lot of traction the last time they were on the ballot. With heavy competition this year, they won’t get in.” F1

The Small Faces may “very well the biggest band in England that barely made a dent in the U.S. Incidentally, this could be the biggest factor that keeps them out of the Hall.” NH As for The Faces, the Hall sometimes has an “urgency to induct [acts] based on the name(s) involved…Previous inductions of the two key members; Ron Wood (The Rolling Stones) and Rod Stewart (for his solo career)…[may create less] urgency to induct them.” NH Still, “Don’t count them out.” F1

“When you have an icon in any field there always seems to be a clamoring for alternate versions of the original. Scotland’s Donovan was called by the some as the British answer to Bob Dylan. This wasn’t a very accurate description as Donovan’s musical vision certainly varied from Dylan; or any one else for that matter.” NH “Not sure there is much momentum behind him, but perhaps he fared well on last year’s ballot.” F1

“Huge in hip-hop circles” F1 and “they may have done more to further the genre of Hip Hop than anyone else on the latter half of the 1980’s.” NH Still, “to get inducted into the Rock Hall, you generally have to transcend your genre.” F1

“Chaka Khan’s name has been on the ‘Previously Considered’ list for years, but here she gets the nomination with her ‘70s band Rufus.” F1 “Many a band has become best known for launching a career of a lead singer who had gone on to eclipse that of his/her former group. Rufus is likely best known for introducing the world to the sultry Chaka Khan who managed to have a great career on her own. Having said that, the best way for both parties to get in to the Hall is to remember the work they did together.” NH

“We are going to play the gender card again on this selection. There are musicians who are ranked lower on this list who may have been more successful and played in much bigger venues, but it is our guess that nobody inspired more women to pick up a guitar than Joan Jett.” NH “Another focus of the ‘Women Who Rock’ exhibit. Many people wanted the Runaways to get in first, but the Rock Hall went with the more popular band.” F1

“This year’s left field nomination. Never count these guys out of the voting.” F1 “Like other successful Blues…Freddie King came from the heart of the Texas and brought the Lone Star sound across the country.” NH

“Laura Nyro must have some strong advocates on the Nominating Committee.” F1 “Singer/Songwriters are often applauded for their lyrics as they should be. Few however, seem to be praised for their vocal skills as well. Laura Nyro was a rare talent who was that dual threat.” NH

Resources and Related Links:
at September 28, 2011 No comments: