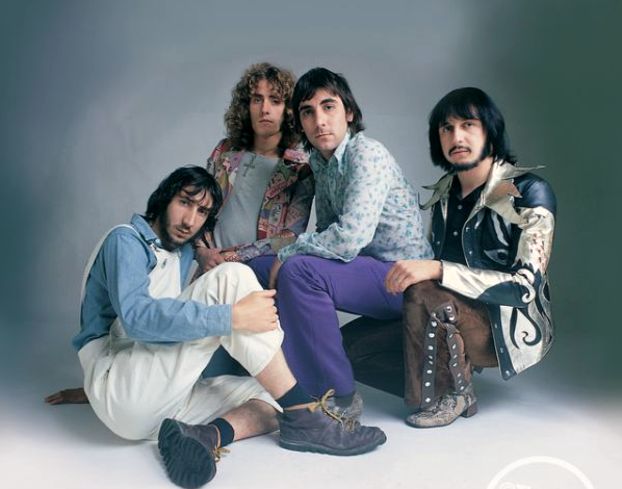 Review: The Who’s “tenure as a stadium-packing rock band began here: out went the mod suits and jerky beat-pop; in came long hair and epic riffs.” BL Who’s Next “set a hard rock standard that even its creators struggled to emulate.” CD It is “powerful and angry” CA and an album “many of today’s so called rock bands should listen to, in order to find out how this rock thing should really be done.” CA Many consider the album “the Who’s crowning achievement.” MU

“As much swagger as [lead singer Roger] Daltrey brings to the Who’s sound, it was always undercut by the understanding that it was Townshend’s introspection and often downright frailty that was really the driving force behind the group.” EK Here, though, “Daltrey fully comes into his own. Although he started out as a fairly standard-issue British R&B belter, a couple years of touring Tommy gave him the courage necessary to be an honest-to-goodness rock star.” EK “He learned to…make himself heard…over the top of The Who’s usual immense sonic assault.” AD

Drummer Keith Moon and bassist John Entwistle each had distinct techniques and played as if theirs “were lead and/or melody instruments.” EK Moon is “thrashing and bashing more precisely than ever before” RS while Entwistle “thunders magnificently” SM and “is as precise as usual” CA and “as fluent as ever.” GS Add in Townshend’s “grandstanding style” EK and “guitar playing [which] alternates between delicate acoustic picking and earthshaking riffing,” SM and “you essentially have four lead players each propped up against each other like a house of cards. In the hands of any other musicians it would have repeatedly collapsed into chaos.” EK

The album grew out of the aborted Lifehouse project, “an ambitious sci-fi rock opera” AMG exploring the “grandiose concept…of…salvation of humanity through rock and roll.” SM It built around a story of a boy set on “finding the Lost Chord and flinging the world into Rock Nirvana in order to save it from the bad guys.” GS “After two fruitless years and a near-suicidal breakdown,” TL brought on in part by “Townsend’s increasing submersion in the brandy bottle and [manager Kit] Lambert’s propensity for hard drugs,” SM the band shelved the project and “siphoned the best ideas into a traditional record.” BL

However, “Who’s Next isn’t any kind of ‘cop-out’ release – something you would usually expect in the wake of the failure of a major project by a high profile group.” AD Instead, now “freed from thematic grandiosity, The Who…made a hit-filled album” TL – “nine prime songs, all of them flawlessly performed and produced.” GS “The ailing Lambert was replaced by Glyn Johns whose no-nonsense approach suited the chastened Townsend.” SM This “is stronger than Tommy” AMG and has “more juice than Live at Leeds.” RC Apart from that album, the band “never sounded as LOUD and unhinged.” AMG

Never is that more apparent than on Won’t Get Fooled Again, the album’s closer. It is “one of the band’s all time great epics:” SM “loud, raucous and out of control,” RV “showcasing everything the band has to offer.” RV It “is a howl of frustration and disillusion with political sloganeering and false promises, [using] the synth as a rhythmic undertow to Moon’s astonishing freefall drum breaks.” SM It also features “arguably the most powerful roar ever captured on a rock record” GS – the “mighty ‘YEAAAAH!’ by Roger at the end.” AD

Meanwhile, the opener, Baba O’Riley, showed off “Townsend’s enthusiastic embrace of…the synthesizer” SM as an instrument for “adding texture where needed and amplifying the force.” AMG He uses them “mainly as a rhythm instrument” MU to “vary the power trio format, not to art things up.” RC This “was really groundbreaking, especially in 1971, as they were often regarded as a novelty instrument.” CA “Baba,” named after Townshend’s guru and “Indian spiritual master Maher Baba and composer Terry O’Riley,” TM opened with the synthesizer and builds “to an ear-splitting crescendo” JA before Townshend moves “to the piano and bangs out the iconic notes of a completely different melody.” TL The “cyclical loop…bubbled and swirled” SM beneath “the crashing drums from Keith Moon, crunching guitar from Pete Townshend and precision bass from John Entwistle.” CA

The other bonafide classic on the album is “the by turns sorrowful and angry” GW Behind Blue Eyes. It “is Townshend’s absolute peak in terms of lyrics.” JA It also pairs “an emotional, though not wussy, acoustic guitar lead” TL with “depth, lovely vocals, [and] harmonies.” AD In addition, Daltrey bestows “an excellent dramatic reading (note especially his intonation of the world ‘vengeance’),” RS “proving that the band really were capable of performing a top quality ballad.” CA