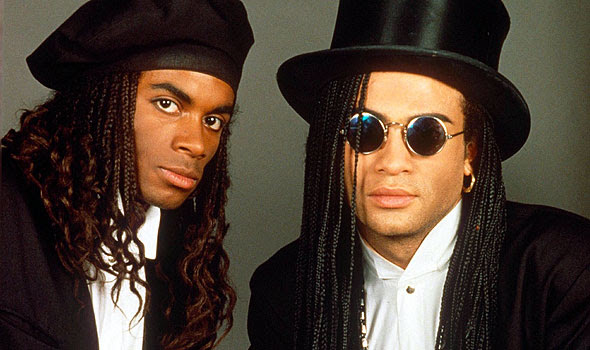 German music producer Frank Farian was the creator of Milli Vanilli, a dance-pop outfit from the late ‘80s. They were presented as the duo of Rob Pilatus and Fabrice Morvan and found success quickly. In October 1988, the single “Girl You Know It’s True” hit the UK, peaking at #3. It charted a couple months later in the U.S. and climbed all the way to the #2 spot.

They proved to have ample songs to go the distance. The next three singles, “Baby Don’t Forget My Number”, “Girl, I’m Gonna Miss You”, and “Blame It on the Rain” were all #1 hits in the U.S. A fifth single, “All or Nothing”, went to #4. All five songs appeared on the 1989 U.S. album Girl You Know It’s True, a reworked version of the previously released German album All or Nothing. Not surprisingly, the U.S. album logged eight weeks atop the Billboard 200 and sold six-million copies.

The duo’s commercial clout translated to Grammy clout as well when they took home the 1989 trophy for Best New Artist, beating out Tone Loc, Neneh Cherry, Soul II Soul, and the Indigo Girls. The only problem was that Rob and Fab didn’t sing. While the original German album only featured them on the cover, the U.S. version went a step further and actually credited the pair with the vocals. In actuality, the dancer-models were hired to serve as the public face for Brad Howell, Johnny Davis, and Charles Shaw – the session musicians who did the actual heavy lifting.

Shaw publicly admitted the ruse which supported suspicions that Rob and Fab were lip-synching live performances. The duo pressured Farian to let them sing on the next album. Rather than cave, he confessed the deception to the press. Soon the Grammy cops came knocking and demanded the return of the ill-gotten award. It is the only time the Grammys have revoked an award.

And here are Rob and Fab, uh, not singing at the Grammys.

The Righteous Brothers hit #1 with “Unchained Melody” more than 25 years after it first charted: October 27, 1990

Thanks to Patrick Swayze, Demi Moore, and a pottery wheel, a bonafide classic was re-introduced to the hearts of radio listeners and record buyers. When Bobby Hatfield belted out “Unchained Melody” in that famous scene from the 1990 movie Ghost, it wasn’t the first time the public heard the song. It wasn’t even the first time they’d heard that version.


By some counts, the song has been recorded over 500 times, making it one of the most recorded of the 20th century. WK However, the one that has become the best known is the 1965 recording by the Righteous Brothers (although technically a solo performance by Bobby Hatfield). WK


The song first surfaced under the Righteous Brothers moniker in 1965 as a B-side to their single “Hung on You.” When DJs took to “Melody” instead, the song climbed to #4 on the U.S. pop charts and #14 in the U.K. A quarter century later, it re-gained airplay thanks to Ghost, but was only commercially available as a single in a newly recorded version. In an unsual occurrence, both versions charted and hit the U.S. top 20. On the AC charts, the 1990 version went #1, while the 1965 version scaled to the top of the U.K. charts.


The song originated in an obscure prison film called Unchained in 1955. Todd Duncan sang it for the film, WK but three other renditions charted on the U.S. pop charts, most notably a chart-topper by Les Baxter. Al Hibbler’s top 10 version also reached the summit of the R&B chart. Both were million sellers. TY In the U.K., Jimmy Young took it to #1. All told, the song can make the unique claim of topping four different charts with five different versions in three different decades.

Posted by Dave Whitaker at 8:23 AM No comments: Links to this post

In 1989, rap group 2 Live Crew released their album As Nasty As They Wanna Be. Propelled by top 40 hit “Me So Horny,” the album went platinum. However, the American Family Association didn’t think the parental advisory sticker on the album adequately warned listeners of what they deemed obsence content. The case was presented to Florida Governor Bob Martinez to see if the album met the legal definition of obsence. At the local level, County Circuit Court judge Mel Grossman ruled there was probable cause for obsenity violations and local sherriff Nick Navarro warned record stores that selling the album might be a prosecutable offense.

Then federal district judge Jose Gonzalez ruled that the album was obsence and therefore illegal to sell. Local retailer Charles Freeman was arrested two days later after he sold a copy of the album to an undercover officer. On June 10, the group itself was arrested for performing some of the material at Club Futura after two police officers brought a tape recorder in to catch the band.

Lawyers for 2 Live Crew essentially presented a case that the first amendment protected the group’s free speech and that even though people might see the lyrics might be lewd, they were meant in jest. It didn’t help that the officers who arrested the group in the club had taped the performance but it was of such poor quality that most of it was indecipherable.

That October, a jury in Fort Lauderdale, Florida, acquitted 2 Live Crew’s Luther Campbell, Chris “Fresh Kid Ice” Wong Won, and Mark “Brother Marquis” Ross after only two hours of deliberation. They faced a year in prison. Freeman had been convicted earlier in the month but his case was overturned on appeal. It wasn’t until May 1992 that a court finally overruled the original finding that Nasty was obscene.

Banned in the U.S.A, written in response to the ordeal

Resources and Related Links:
Posted by Dave Whitaker at 6:00 AM No comments: Links to this post Violator was Depeche Mode’s “most mainstream chart-climbing album” AZ selling 8 million copies worldwide. It “is a quintessential benchmark of pop, rock and electronic music…because it [seamlessly] marries dance, goth-rock and synth-pop with good ol’ fashioned Motown funk and rock n’ roll.” SL Violator “was slicker and more accessible than the band’s previous efforts” SL and “song for song…[is] simply the best, most consistent effort yet from the band.” AMG It was “heavily influenced by techno-pop” AZ with half of the tracks “tailor-made for the dance floor.” AZ It was “conceived when dance-club DJs were gaining recognition alongside original composers.” AZ Lead single Personal Jesus was “the group’s most striking single yet” TB yet was also “the unlikeliest of pop hits.” SL It is “a cynical jab at organized religion and televangelism.” SL Musically, it as “perversely simplistic, with a stiff, arcane funk/hip-hop beat and basic blues guitar chords, and tremendous, thanks to sharp production touches and David Gahan’s echoed, snaky vocals.” AMG Enjoy the Silence is “a nothing-else-remains-but-us ballad pumped up into a huge, dramatic romance/dance number, commanding in its mock orchestral/choir scope.” AMG It remains the group’s only U.S. top ten pop hit. Third single Policy of Truth was “a low-key Motown funk number for the modern day with a sharp love/hate lyric to boot.” AMG On World in My Eyes, “chief songwriter Martin Gore’s voice pads lead vocalist Dave Gahan’s, and then quickly mimes him.” SL That song, as well as Sweetest Perfection and Halo, “turn teen angst and sexual obsession into grand synth-pop melodrama.” RS “No other Depeche Mode album has been this captivating and sophisticated.” SL It “remains the group’s defining work.” TB Awards:

Posted by Dave Whitaker at 8:58 PM No comments: Links to this post

Posted by Dave Whitaker at 2:53 PM No comments: Links to this post