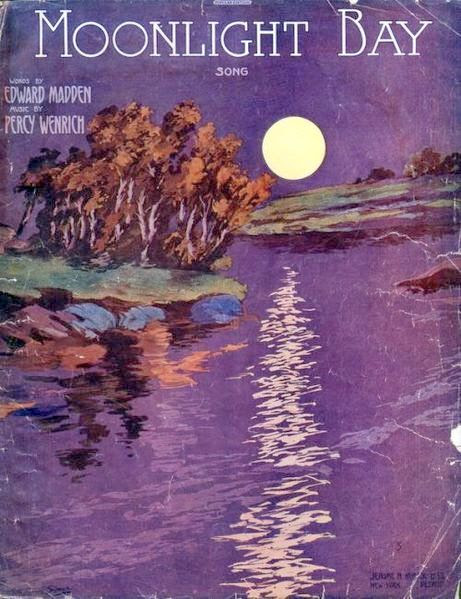 Review: “Arguably the best moonlight song ever written,” PS “Moonlight Bay” “conjures up an entire lost era of a slower-paced America that…had plenty of time for gentle spooning in an unspoiled natural setting.” SS-587 It is “a very durable song from Tin Pan Alley about an idyllic setting for romance.” RCG

Edward Madden, who also wrote “By the Light of the Silvery Moon,” penned the lyrics about “sailing across the bay at night in the moonlight while losing one’s heart to true love.” RCG The music was written by Percy Wenrich, “one of the era’s specialists in sentimental ballads.” SS-587. He came from a musical family wrote a number of hits in the rag genre and performed with his wife, Dolly Connelly, in vaudeville. PS

It was Connelly who introduced the song in vaudeville and took it to #3 on the U.S. pop charts in 1912. It also became a “huge barbershop-quartet song as exemplified by the American Quartet,” JA-136 who made the tune the biggest hit of 1912. WHC-23

The song was revived by Alice Faye in the 1943 film On Moonlight Bay and again in 1951 in a Doris Day and Gordon MacRae film of the same name. The song has appeared many times in Looney Tunes and Merrie Melodies shorts featuring Porky Pig and Daffy Duck. WK In 1951, Bing and Gary Crosby took their version of the song to #14. JA-136