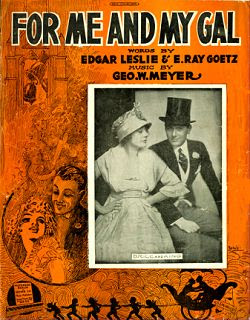 George W. Meyer was a composer born in Boston in 1884. He had hits spanning many years, including “”My Song of the Nile,” “Lonesome,” “My Mother’s Rosary” and the great novelty song “Where Did Robinson Crusoe Go with Friday on Saturday Night?” PS However, his biggest hit was probably “For Me and My Gal,” with lyrics written by Edgar Leslie and E. Ray Goetz. When Meyer died, his wife had the song title inscribed on his tombstone. RCG

The song “was a forerunner of the jazz age.” RCG Its lyrics about “bells ringing and birds singing as two turtle doves go off to their wedding” RCG showed that in 1917, even as Americans were consumed by World War I, they still relished love songs.

The song “was still on pianos all over America” RCG In 1942 when Gene Kelly and Judy Garland sang the song in the movie of the same name. The movie celebrated vaudeville and other hits from the World War I era. Their recording was a #3 hit featuring Garland’s then-husband David Rose and His Orchestra. JA Guy Lombardo also charted with a version of the song in 1943, reaching #17.

For Me and My Gal (Gene Kelly & Judy Garland)