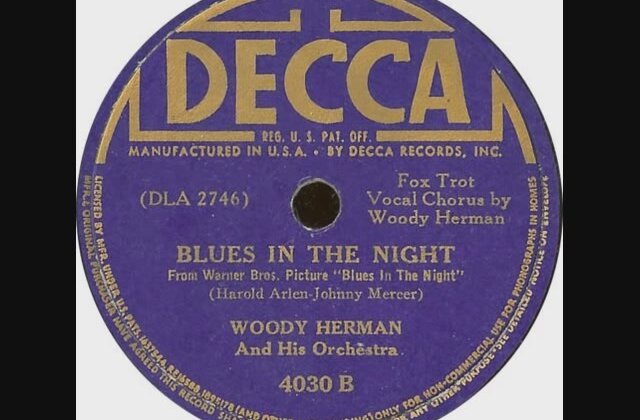 Woody Herman “Blues in the Night (My Mama Done Tol’ Me)”

Review: Composer Harold Arlen and lyricist Johnny Mercer were approached to write a song for a movie about a jazz quintet riding the rails in search of its big break. There was a scene in which the band members ended up in jail and needed to sing a blues song. Arlen wrote a melody after analyzing recordings of blues songs and then Mercer penned four pages of lyrics. Arlen rarely suggested changes to Mercer’s lyrics, but recommended that the line “my mama done tol’ me” be moved to the beginning. It became the song’s subtitle. SB

When they finished the song, Mercer called singer Margaret Whiting, who’d sung the pair’s songs “That Old Black Magic” and “Come Rain or Come Shine.” She told Mercer she had guests for dinner, but he and Arlen could come over later to share the song. When Mercer found out the guests included Judy Garland, Mickey Rooney, and Mel Tormé, he announced, “My God, we’re coming right over.” After they played the song, Garland asked them to play it again and Rooney said, “That’s the greatest thing I’ve ever heard.” SB

The producers of the movie were taken with the song as well – so much so that they changed the name of the movie from Hot Nocturne to Blues in the Night. TY-105 Jimmie Lunceford’s band introduced the song in the movie and took it to #4 on the charts. It charted six times in 1941 and 1942. Dinah Shore (#4) had her first million-seller with the song TY-105 and Cab Calloway (#8), Artie Shaw (#10), and Benny Goodman (#20) also had success with the song. In 1952, Rosemary Clooney charted with the song again (#17). Frank Sinatra and Ella Fitzgerald also recorded the song.

However, Woody Herman had the most successful recording of the song. He started as a sideman and singer with Isham Jones’ orchestra from 1934-36. He later fronted his own band and became, in the words of writer Will Friedwald, “the most successful…talent scout in the history of jazz.” SS-604 His initial plan was to record “Blues in the Night” as an instrumental but in a cab ride to the recording session, Mercer taught him the lyrics. SS-604 Mercer and Arlen sat in on the session and reported satisfaction with his performance. SS-604