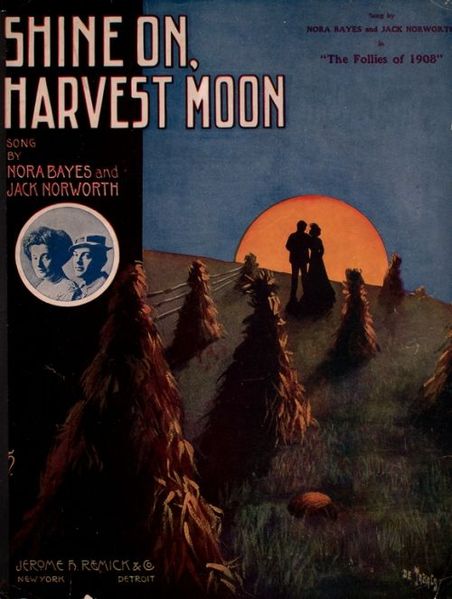 Nora Bayes was a Broadway and vaudevillian performer in the early 1900s. In 1908, she married Jack Norworth, a singer, songwriter, and dancer. The pair toured and composed together. The duo’s collaboration, “Shine on, Harvest Moon,” resulted in what may be “the most recognized of the many ‘moon’ ballads.” RCG It was “decidedly old-fashioned and a product of twentieth century innocence.” RCG The duo introduced the song in Florenz Ziegfeld’s Follies of 1908. The couple didn’t last, divorcing in 1913 (the second of five marriages for Bayes!), SF but the song survived. Both performed it the rest of their lives and it became Bayes’ signature song. RCG

It became a favorite for player pianos and barbershop quartets RCG and “remains a perennial among amateur singers everywhere.” JA It had an impressive chart life with seven takes on the song peaking in the top 20 over the next quarter century. The first, and most successful, was a duet between Harry MacDonough and Miss Walton (believed to be Elise Stevenson) in 1909. They took the song to #1 for 9 weeks. Three other versions of the song charted that year. Ada Jones and Billy Murray also took it to #1 while the duo of Frank Stanley and Henry Burr hit #2 and Bob Roberts’ version went to #6. The following year, Arthur Pryor also went top 5 with the song.

“Harvest Moon” was revived by Ruth Etting in Ziegfeld Follies of 1931. JA Ethel Waters took the song back to the top ten that same year. Two years later, Kate Smith took the song back to the top 20. Over the years, the song has also been sung by Judy Garland, Vera Lynn, Glenn Miller, and Liza Minnelli. RCG At age 8, Britney Spears sang it for her Mickey Mouse Club audition. WK

It has also appeared in at least a dozen films, most notably an eponymously titled 1944 biopic starring Ann Sheridan and Dennis Morgan as Bayes and Norworth. RCG A 1938 Roy Rogers western was named after the song and Laurel & Hardy performed it in their 1939 film The Flying Deuces. It was also used in A Tree Grows in Brooklyn (1945) and Pennies from Heaven (1978). WK