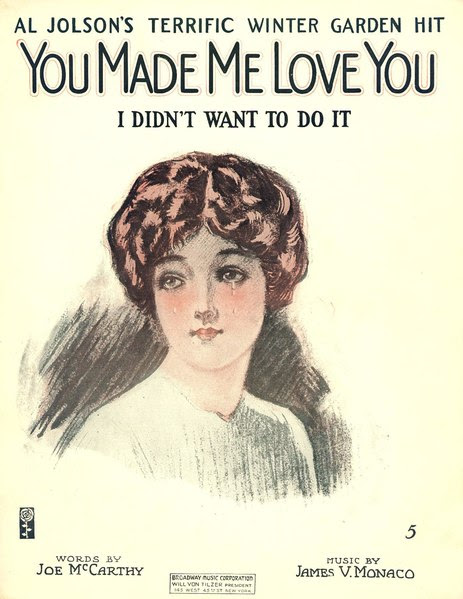 Review: James Monaco, one of the songwriters, emigrated from Italy to the United States in the 1890s. He started out in Chicago as a self-taught ragtime pianist, billing himself as “Ragtime Jimmie.” LW-26 He then went to New York where he became a Tin Pan Alley songwriter. For this song, Monaco collaborated with lyricist Joe McCarthy (“I’m Always Chasing Rainbows,”) who wrote for Broadway shows in the 1920s and ‘30s. LW-26

The song is remembered for its chorus marked by its familiar melody. It is a “skillfully crafted lyric that perfectly matches its bluesy melody, and suited Jolson’s…capacity for melodrama.” LW-26 It was the first of two songs Monaco composed for Al Jolson. He also wrote “Dirty Hands, Dirty Face” which was featured in 1927’s The Jazz Singer.” LW-26

As “the world’s first talking picture” LW-26 The Jazz Singer, was a defining moment in cinematic history and Jolson’s career, but he made a name for himself beyond that movie. Born Asa Yoelson in St. Petersburg, Russia, Jolson grew up in Washington, D.C. and found success as a vaudeville performer. He first charted in 1912, but got off to a fast start. “You Made Me Love You” was only his fifth hit, but fourth #1. Over 35 years of chart success, he topped the chart 23 times. PM-233 However, it was this song which “was identified with him for the rest of his career.” JA-222