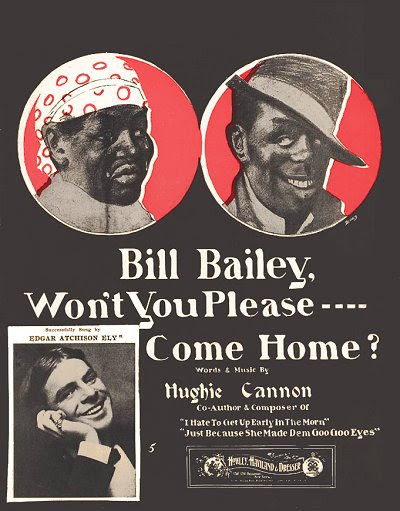 Review: This “early ragtime classic” RCG and “favorite of Dixie jazz bands” JA-22 became a “sing-along standard” RCG thanks to the ease with which it could be adapted to jazz or played on honky-tonk piano or banjo. RCG John Queen, a minstrel and songwriter introduced this instant hit. Arthur Collins, Dan Quinn, and Silas Leachman each took the song to the top 5 in 1902, but Collins’ version was the biggest. PM-477 He was no stranger to the top, having landed there seven times before. This, however, was his biggest hit yet.

Over the years, the song was recorded by a number of other big-name artists. Jimmy Durante and his sidekick Eddie Jackson often used it in their act. JA-22 Bobby Darin took it to number 19 in 1960. Others who recorded the song included Louis Armstrong, Ella Fitzgerald, and Della Reese. PS The song also spawned numerous parodies, including Tom Lehrer’s “(Won’t You Come Home) Disraeli?” JA-22 As with many “coon songs”, as such racially deragotory songs from the early 20th century have come to be known, later recordings were often “sanitized.” PS

Several people have claimed to be the original Bill Bailey, JA-22 but according to Tin Pan Alley folklore, RCG the Detroit-born Hughie Cannon was an alcoholic living in a flophouse. One night he supposedly met a real Bill Bailey, an African American vaudeville singer. Bailey’s wife had thrown him out of the house because she’d had it with his late-night partying. PS Cannon gave Bailey money for a room for the night, but was sure the wife would soon beg for him to return.

Cannon then wrote a song about a wife hanging laundry and singing about her hopes that her husband would soon come home. She confesses that she drove him away with “nothing but a fine tooth comb,” but Bailey returns with a fancy car. RCG The song’s popularity led to spin-off tunes “I Wonder Why Bill Bailey Won’t Come Home” and “Since Bill Bailey Came Back Home.” PS