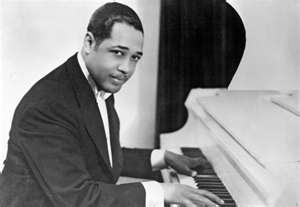 Review: A New Orleans jazz musician named Lorenzo Tio, Jr. was visiting his former student, Barney Bigard, in New York. Tio shared a melody called “Dreamy Blues” which he’d written as the theme song for his group back home. Bigard asked to borrow it and worked up what would become the clarinet solo for Duke Ellington’s “Mood Indigo.” DH

Ellington is credited with “composing a song of his own on top of it” DH and turning the structure upside down. Typically jazz songs were arranged with the clarinet, trumpet, and trombone from highest to lowest pitch, but Ellington flipped it around the other way. DH The approach played on his talents of “subtle sophistication” NPR and “creating an element of surprise in his compositions.” NPR Ellington worked up a recording for an October 1930 broadcast, saying, “It was the first tune I ever wrote specially for microphone transmission.” WK After, as he says, “wads of mail came in raving about the new tune.” WK

In 1931, lyrics were added. They were credited to Irving Mills, Ellington’s manager, DH but Mitchell Parish, who also wrote words for the classic “Star Dust,” claimed in a 1987 New York Times interview that he was really the one responsible. SB He also is supposedly the one who gave the song its new title, MM which “suggests the deep violet-blue of indigo.” TY

The song was first recorded by Ellington’s Jungle Band and later under the name The Harlem Footwarmers. SB The 1931 recording became a jazz standard and “one of the most beloved recordings of all time.” JA It was revived in 1934 with a top 20 version by Jimmie Lunceford and resurfaced again in 1954 with versions by the Norman Petty Trio (#14) and the Four Freshmen (#24). PM Over the years, the song has been recorded many times as both an instrumental and vocal piece. Among those recording it are Louis Armstrong, Tony Bennett, Cab Calloway, Nat “King” Cole, Dr. John, Ella Fitzgerald, Charles Mingus, Nina Simone, Frank Sinatra, and Dinah Washington.