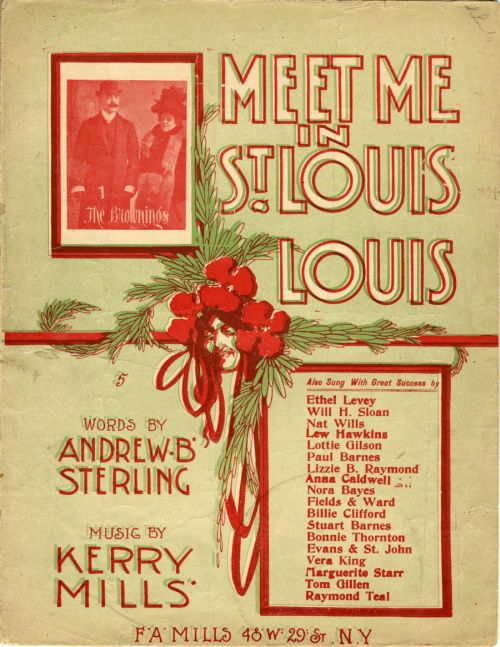 Review: In 1904, the world shone a light on St. Louis. In celebration of the centential of the Louisiana Purchase, the U.S. “Gateway to the West” became the stage for two major parties – the World’s Fair and the third modern Olympic Games. Composer Kerry Mills (“At a Georgia Camp Meeting,” “Red Wing”) and lyricist Andrew Sterling (“Wait Till the Sun Shines, Nellie,” “When My Baby Smiles at Me”) capitalized on the city’s popularity by penning what what would become the exposition’s theme song. TR-295

According to Mills and Sterling, the idea for the song came when they ordered a drink called a Louis and had it served to them by a bartender named Louis. They crafted a story of Flossie, a housewife who bolts for the World’s Fair in St. Louis, leaving a note behind for her husband, Louis. RCG He discovers, “The dresses that hung in the hall/ Were gone, she had taken them all/ She took all his rings/ And the rest of his things.” In her note, Flossie says, “We will dance the Hoochie-Koochie/ I Will be your Tootsie-Wootsie/ If you will meet me in St. Louis, Louis/ Meet me at the Fair.”

In an era when songs when commercial recordings were sometimes held off until sheet music sales proved a song’s worth, “Louis” enjoyed success on both fronts simultaneously. Certainly the timeliness of the event helped, but it also didn’t hurt that it was Billy Murray who crooned the tune. He was “the greatest star of the recording industry’s pioneer recording era.” SS-434 His biographers said, “his greatest talent was casting himself as Everyman in his recordings…Murray [always] managed to come across as a member of the crowd…forging an empathetic bond with the average American citizen.” SS-434

He took the song to #1 in 1904. That same year, S.H. Dudley and J.W. Myers went top 5 with their versions. Songs about famous events were commonplace then, but most had a short life. However, this song found its way into stage revues and “became a vaudeville standard in hundreds of acts.” RCG It was also featured in movies such as The Strawberry Blonde (1941) and By the Light of the Silvery Moon (1953). Judy Garland immortalized the song when she performed it for the 1944 movie of the same name and took the song back to the charts, reaching #22.