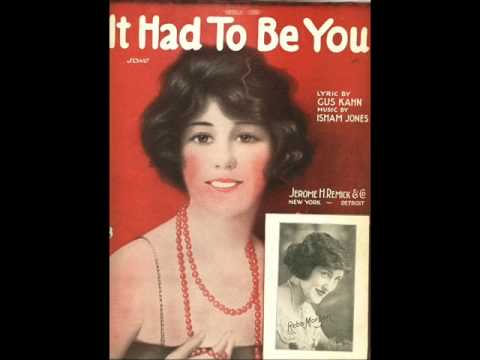 Isham Jones “It Had to Be You”

Review: “This is one of the high points in Tin Pan Alley era songwriting” RCG and “one of the most enduringly popular ballads of the 1920s.” SS-589 Unlike many of its Great American Songbook counterparts, “this effortless classic” RCG didn’t “put love and lovers on a pedestal,” TM but opted for the reality of being “smitten in spite of the significant other’s bossy and cranky nature,” TM and acknowledging that “if we’re lucky, we find somebody who loves us and can’t live without us, in spite of our faults.” TM

It was a sophisticated song “with grown-up, often witty lyrics that have stood the test of time, are endlessly revived and still sound as good today as they did then.” LW-48 Kahn “uses simple masculine rhymes and short but potent phrases throughout” RCG and “easily captivates all the romance and humanity in a simple, straightforward love song.” RCG

Interestingly, the most successful version of the song is Isham Jones’ instrumental recording. Jones took it to #1, as he did eight times total, including with “On the Alamo,” “Swingin’ Down the Lane,” “Spain” and “I’ll See You in My Dreams.” PM-240 While they were all instrumentals, Gus Kahn provided lyrics for all of them, as he also did for classics like “Carolina in the Morning,” “Yes Sir! That’s My Baby,” and “Makin’ Whoopee.” SS-589

Posted by Dave Whitaker at 6:17 AM