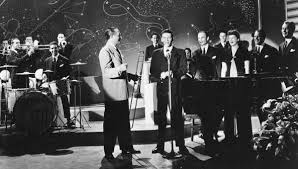 Ruth Lowe was a pianist with Ina Ray Hutton’s all-girl orchestra when she composed this song about the death of her husband, just a few months after their marriage. TY Believing in the song’s potential, she staked out Tommy Dorsey’s several-night engagement at Toronto’s Canadian National Exhibition in September 1939. She finally got Carmen Mastren, the band’s guitarist, to give her demo a listen. SS-373 Dorsey wasn’t initially swayed and passed the song on to Glenn Miller, who recorded a medium-tempo version, but it got overlooked. However, when Frank Sinatra came on board with Dorsey, they took another stab at recording it. SS-373

Sinatra had recorded with Harry James and His Orchestra in 1939, including the eventual #1 song “All Or Nothing at All.” However, those recordings didn’t chart until 1943 and 1944. When vocalist Jack Leonard parted ways with Dorsey in 1939, Dorsey was looking for a replacement. When Dorsey and James ended up at nearby gigs in Chicago, Dorsey sent someone to talk to Sinatra. James knew Sinatra, whose wife Nancy was pregnant, needed the money and agreed to let Sinatra work with Dorsey. SS-373

Sinatra’s first recording session with Dorsey in February 1940 led to Dorsey’s 100th chart entry, “Polka Dots and Moonbeams,” and the first taste of the charts for Sinatra. They charted a couple of more times before they struck gold with the “unabashedly sentimental ballad” SS-373 “I’ll Never Smile Again.” Down Beat magazine called it “the most sensational Tin Pan Alley hit of the year.” SS-373

It was Dorsey’s fourteenth trip to the top and the biggest hit of his career. PM-136 As Sinatra’s maiden voyage to the pinnacle, it “made him a national heartthrob virtually overnight.” SS-373 He would hit #1 eleven times total, but this was his most successful song. It also bore the distinction of being the first #1 on Billboard’s best-selling chart. TY It also marked a shift from the “swing era” to the “sing era” when “the vocalists, not the bands and their leaders, were kings”. TY Previously, vocalists were generally limited to one chorus. TY