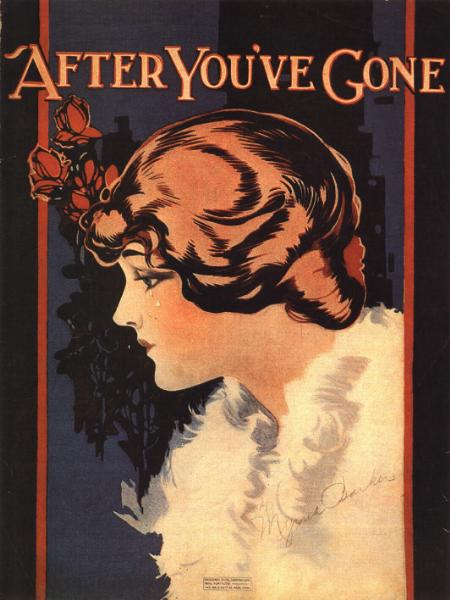 Review: John Turner Layton, born in Washington, D.C. in 1894, was a rarity in his time – a black composer. He teamed with lyricist Harry Creamer as a vaudeville act PS and they contributed to many Broadway shows. The pair had hits with “Way Down Yonder in New Orleans” (1922) and “Dear Old Southland” (1921), PS but their greatest success came from “After You’ve Gone.”

This “sultry ballad” PS has been called “one of the first meaningful torch songs.” MM It featured darker lyrics than the usual Tin Pan Alley fare of the day MM and its timeless melodic style and lyrical construct make it feel like a song which could have been written yesterday. PS

From 1918 to 1937, ten different versions of this song hit the top 20. The first, a 1918 rendition by Henry Burr and Albert Campbell, peaked at #2. Billy Murray, Bessie Smith, Sophie Tucker, Paul Whiteman, Louis Armstrong, Benny Goodman, and Lionel Hampton were among the others to chart with the song. PM Because it can easily be improvised over, it has become a favorite of even modern-day jazz-oriented artists, WK being covered by Wynton Marsalis, Harry Connick, Jr., and Jamie Cullum.