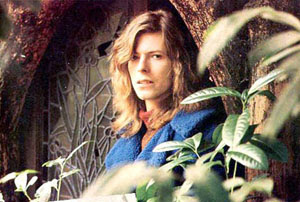 Review: “Bowie’s first great album was a visionary blend of gay camp, flashy rock guitar and saloon-piano balladry.” RS500 It “marks the beginning of the classic Bowie period.” AD “At a moment when no one knew whether David Bowie was a transvestite, provocateur, folk singer or space alien,” TL “the then 24-year-old released an album that slyly capitalized on the confusion.” TL His previous album, The Man Who Sold the World, had an “almost heavy-metal sound;” TB Hunky Dory saw Bowie return to “the acoustic guitar-based singer-songwriter sound of his earlier work.” TB

“What elevated the album…was Bowie’s newly developed and highly ambitious capacity for bridging the gap between highbrow and lowbrow art forms.” TB He “blends pop, dancehall, art-rock and folk for his most varied effort.” RV “Not only did the album boast more folky songs (‘Song for Bob Dylan,’ The Bewlay Brothers), but he again flirted with Anthony Newley-esque dancehall music (Kooks, Fill Your Heart).” AMG Bowie also crafted “the soaring Life on Mars?” AMG which “placed him in deep space,” TL and “the dark acoustic rocker Andy Warhol.” AMG There’s also “the revamped Tin Pan Alley of Changes,” AMG which “proved he could write a great pop song about who he really (maybe) was.” TL

As for who Bowie really was, he’d “experimented with a number of personas” PR up to this point in his career and was now showcasing his ability to tackle “a kaleidoscopic array of pop styles” AMG as well. Hunky Dory mostly finds Bowie “in the guise of an early seventies singer-songwriter” PR who “wears his influences on his sleeve.” CS There’s his “Neil Young homage Quicksand” AMG and Song for Bob Dylan, in which Bowie delivers “a powerful examination of the use of an alter ego to create art.” RV He also “inflects his words with a Lou Reed sensibility, as on Oh! You Pretty Things, a rallying cry for homosexuality,” RV and makes “a direct sound connection to the Velvet Underground with Queen Bitch.” CS Such songs “clarified his earthbound ambition to be a boho poet with prodigal style.” TL

Hunky Dory is a “quantum leap from his previous material.” AD “The playing and production and arrangements were all assured and professional.” AD “Mick Ronson came into his own…proving himself an adept arranger for strings as well as a fine guitar player. Keyboard superstar and then top session man Rick Wakeman provided fine piano and keyboard flourishes.” AD The latter’s “cabaret piano…dominate[s] the sound of the album.” AMG

Hunky Dory “is artistically the album that made the breakthrough for Bowie.” AD It “is not a concept album, but the concepts within would eventually solidify and manifest in the character of Bowie’s spaceman and perhaps even in his personal philosophies.” CS This album was also notable for being “the first to feature the line-up that would become the Spiders from Mars.” CS This is “suggestive of a dress rehearsal with Ziggy waiting impatiently in the wings for his understudy to vacate the stage.” PR “The themes and ideas scattered throughout the songs’ lyrics and arrangements set the stage for not only Ziggy Stardust, but for much of Bowie’s output in the ’70s.” CS

“On the surface, such a wide range of styles and sounds would make an album incoherent, but Bowie’s improved songwriting and determined sense of style” AMG give Bowie the distinction of “inventing – and perfecting – a new style of rock & roll glamour.” RS500 He created “a touchstone for reinterpreting pop’s traditions into fresh, postmodern pop music.” AMG