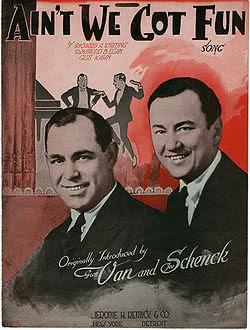 As Don Tyler says in his book Hit Parade 1920-1955, this foxtrot from the Roaring Twenties “would have made a good theme song for those hellbent on seeking the fun typical of the era.” TY It “mixes zesty music with a nonsense lyric” RCG about “young people enjoying the times even as a bill collector knocks on the door.” RCG The song also reminds listeners that while the 1920s were typically viewed as a time of economic growth, there was a short depression in 1920-21. The song shows, though, that “despite tough times, most people are resilient and cope with the bad times.” PS Sometimes they can even do it with a sense of humor, showcased by lines like “the rich get richer and the poor get children.”

Arthur West first performed the song in the revue Satires of 1920 JA and George Watts introduced it in vaudeville. TY Then Ruth Roye and the duo of Gus Van and Joe Schenck helped popularize it. TY The latter were a comedy-musical team who not only found success in vaudeville, but Broadway and radio. PM They also had the most successful chart run with the song with their #1 version in 1921. PM

Ain’t We Got Fun?

Two other versions charted in 1921-22: the Benson Orchestra of Chicago took it to #9 and Billy Jones hit #12. PM However, the song has been recorded by many big names over the years. According to lyricsplayground.com, some of the artists who have recorded this song include Chet Atkins, Rosemary Clooney, Bing Crosby, Doris Day, Cliff “Ukelele Ike” Edwards, Bob Hope, Al Jolson, Jack Kerouac, Peggy Lee, Gordon MacRae, Mitch Miler, Debbie Reynolds, Dick Van Dyke, and Margaret Whiting.

The song even figures into literature, including Dorothy Parker’s 1929 award-winning short story “Big Blonde” and F. Scott Fitzgerald’s classic novel, The Great Gatsby. SF It also showed up in the 1974 film adaptation of the latter, TY as well as in 1953’s By the Light of the Silvery Moon TY and 1951’s I’ll See You in My Dreams. The latter was a biopic about Gus Kahn, one of the song’s lyricists. JA Eddie Cantor sang it for the 1953 soundtrack for The Eddie Cantor Story. JA Woody Allen also used the song in the 1983 film Zelig. WK Carnival Cruise Lines also used the song in the 1990s in their commercials. JA