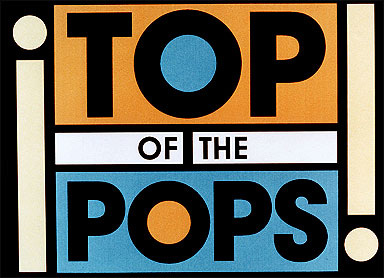 The British music television show Top of the Pops launched on New Year’s Day in 1964. BBC producer Johnnie Stewart created TOTP, inspired by the Radio Luxembourg show Teen and Twenty Disc Club. Each show counted down the hits from the past week. The #1 song was featured every week, but otherwise a song did not generally appear if it had been on the previous week or was heading down the charts.

The inaugural show featured The Beatles, The Rolling Stones, The Hollies, and Dusty Springfield. The Beatles’ “I Want to Hold Your Hand” was the #1 song that week. Each week consisted of performances of some of the most popular music artists and counted down the week’s hit singles. While the show aired live, artists actually mimed to the songs. Over the show’s history, however, there were times when songs were performed at least partially live.

Traditionally TOTP aired on BBC 1 on Thursdays, but in 1996 it moved to Fridays and then in 2005 it moved to Sundays on BBC 2. The show was broadcast until July 30, 2006, becoming the world’s longest-running weekly music show. The show also aired an annual look at the best-selling singles of the year on Christmas Day. Even after the show’s cancellation, that tradition continued.

Resources and Related Links:
Posted by Dave Whitaker at 12:31 AM

Email ThisBlogThis!Share to TwitterShare to FacebookShare to Pinterest
Labels: 1964, BBC, Dusty Springfield, How the Beatles, I Want to Hold Your Hand, Johnnie Stewart, New Year's Day, The Hollies, The Rolling Stones, Top of the Pops, TOTP