Derek and the Dominos charted with Layla and Other Assorted Love Songs: November 21, 1970 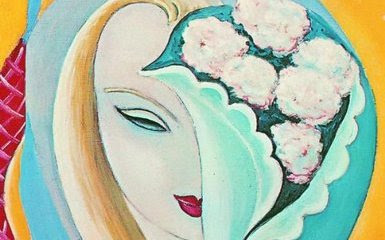 Review: By 1970, Eric Clapton had already become a superstar thanks “some of the most stunning, groundbreaking blues-based guitar work of the rock era” PK in stints with John Mayall’s Bluesbreakers, The Yardbirds, Cream, and Blind Faith. Between that and a solo album, “Clapton’s deification had become such a burden to him…that he felt forced to seek anonymity.” PR Fresh off a tour with Delaney & Bonnie, “a roughshod hippie honky-tonk band,” VH1 he headed back into the studio with their keyboardist Bobby Whitlock, drummer Jim Gordon, and bassist Carl Radle. When Duane Allman signed on as well, the resulting Derek and the Dominos essentially amounted to a supergroup.

Allman’s “spectacular slide guitar pushed Clapton to new heights” AMG and the pair’s “wondrous guitar interplay…backed by a tight (but not showy) backing band” IGN gave Clapton “his greatest album” AMG and made for “one of the all-time classic dual-guitar albums.” VH1 Working with Delaney & Bonnie helped Clapton “reconcile his spiritual connection with the American South that had given birth to Clapton’s beloved blues.” VH1 The Layla & Other Assorted Love Songs album was their only studio recording, but it proved to be “one of the few blues-based classic rock albums which avoids dull predictability or Led Zep-ish testosterone riffs.” PK

Clapton was going through hell during recording, having fallen in love with Patti Boyd, the wife of his best friend, George Harrison. As a result, “pain drips from the grooves of this seminal record that has something for everyone – hard-driving rockers, stormy blues, wailing solos.” ZS Of course, the standout is the title track with its “stunning opening riff,” ZS but the album also “yielded such memorable classics as…Bell Bottom Blues and the band’s cover of the Jami Hendrix staple Little Wing.” IGN

However, a big part of what makes this “such a powerful record is that Clapton, ignoring the traditions that occasionally painted him into a corner, simply tears through these songs with burning, intense emotion. He makes standards like Have You Ever Loved a Woman and Nobody Knows You (When You're Down and Out) into his own, while his collaborations with Bobby Whitlock – including Any Day and Why Does Love Got to Be So Sad? – teem with passion.” AMG