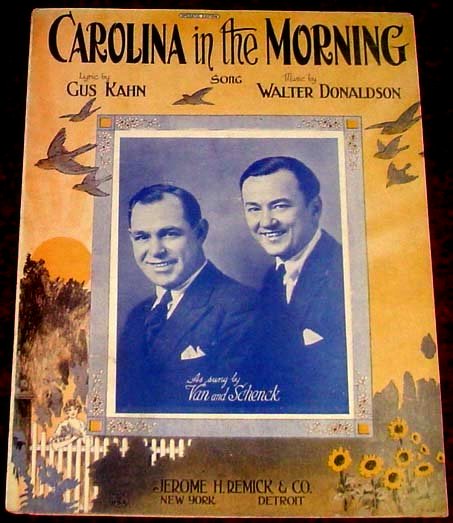 Van & Schenck “Carolina in the Morning”

Review: The song was introduced by Vaudeville performer William Frawley and then quickly added to the musical revue The Passing Show of 1922, RCG where it was sung by Willie and Eugene Howard. JA-33 The show opened on September 20, 1922 at the Winter Garden Theater and closed on December 2, 1922 after 85 performances. SB

In addition to Van & Schenck’s #1 recording of the song, three other versions charted in 1923 – Marion Harris (#4), Paul Whiteman (#5), and the American Quartet (#8). Al Jolson revived it in the movie The Jolson Story (1946) RCG with a version which outsold the original. WK It emerged again in the 1951 Gus Kahn biopic I’ll See You in My Dreams. JA-33 Danny Winchell charted with it in 1952, making it to #30. Bing Crosby, Jimmy Durante, Benny Goodman, Judy Garland, Bill Haley & His Comets, Danny Kaye, Dean Martin, and Dinah Shore have all recorded it. SB Frawley himself sang the song on two different television shows on which he was a star – I Love Lucy and My Three Sons WK and Dick Van Dyke and Mary Tyler Moore performed it on The Dick Van Dyke Show. WK The song has also been used frequently for Warner Brothers’ Merrie Melodies and Looney Tunes cartoons. WK

Both North and South Carolina lay claim to this tune which deals with longing to “return home where ‘The dew is pearly kinda early in the morning’.” RCG “The southern drawl is alluded to by rhyming ‘Carolina’ with ‘finer.’” RCG

Amusingly, the song was written by a New Yorker (Walter Donaldson, born in Brooklyn in 1893) and a German (Gus Kahn, born in Coblenz in 1886). Donaldson wrote more than 600 songs; his best known came in the years between World War I and II. PS Kahn’s family came to the United States in 1891 and settled in Chicago. He had his first song published in 1907 and then wrote lyrics for vaudeville performers in Chicago and New York before moving to California in 1933 to write for movies. Some of his best-known songs are “Pretty Baby” (1916), “Makin’ Whoopee” (1928), and “Liza” (1928). PS