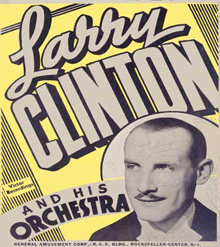 Review: Peter DeRose wrote “Deep Purple” as a piano composition. It was published in 1933 and the following year it was arranged for orchestra by, depending on the account, either Domenico Savino TY or Paul Whiteman. WK Whiteman said, he was “making a lady out of jazz.” WK When the song became a hit via sheet music, Mitchell Parish added lyrics in 1938.

In 1939, five versions of the song charted, including top 10 hits by Jimmy Dorsey and Guy Lombardo and top 20 hits by Bing Crosby and Artie Shaw. PM The biggest version, however, was the one by Larry Clinton & His Orcestra featuring Bea Wain as vocalist. PM That year the song was the #3 jukebox selection of the year. TY A decade later, Paul Weston’s instrumental version hit #20. PM In 1957, The Dominoes revamped the song as a doo-wop hit. The 1976 version by the brother-and-sister act of Donny and Marie Osmond was a #14 hit. HT

They weren’t the only siblings to have success with the song. Nino Tempo and April Stevens took the song back to #1 in 1963. HT The brother and sister had worked separately before meeting Ahmet Ertegun and signing with Atlantic Records. The pair had gone into the studio to record “Paradise,” but with 14 minutes left of studio time, Ahmet encouraged them to tackle “Deep Purple.” Nino was supposed to sing the second chorus, but when he couldn’t remember the words, April spoke them. The “narration” stayed in and became part of the song. BR1

The sentimental ballad was a favorite of Babe Ruth, who even had DeRose play the song at his birthday parties for roughly a decade. WK In addition, the song provided the heavy metal group Deep Purple with their name. Guitarist Ritchie Blackmore’s grandmother kept asking the group if they would perform the song because it was her favorite. WK