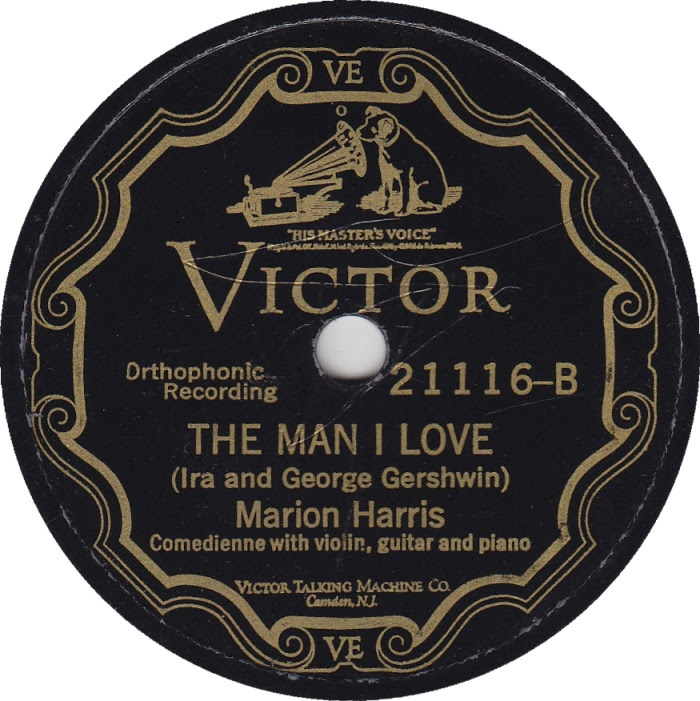 Marion Harris “The Man I Love”

Review: In 1964, Wilfrid Mellers wrote in Music in a New Found Land that “The Man I Love” could “stake a claim to being the most moving pop song in our time SS-25 In 1950, Sigmund Spaeth wrote in the New York Times that it was “the best popular song ever written.” SS-25

The Gershwin brothers wrote the song in the spring of 1924 SS-25 following George’s masterful “Rhapsody in Blue.” Deena Rosenberg noted that George used motifs in “Rhapsody in Blue” – including its conclusion – to craft the chorus melody for “The Man I Love,” which meant that the latter “almost literally picks up where the ‘Rhapsody’ leaves off.” SS-25

Originally intended for the Broadway show Lady, Be Good! starring Fred and Adele Astaire, it was dropped JA-128 when she couldn’t match the emotional demand of the song. SS-25 The song was then slated for Strike Up the Band which never made it to New York, and then got bumped from the musical Rosalie SS-25 before finally finding success on Tin Pan Alley. RCG George speculated that the song didn’t catch on because it was difficult to whistle or hum. RCG Eventually, though, it became one of the brothers’ most-recorded ballads. RCG

Eva Gauthier gave the first public performance of the song at one of her concerts and it slowly gained in popularity when publisher Max Deyfus liked the song enough to publish it despite not being featured in a Broadway musical. RCG Helen Morgan then featured it in her nightclub act RCG and Marion Harris had a top 5 hit with it in 1928. Three more versions charted that year – Sophie Tucker (#11), Paul Whiteman (#15), and Fred Rich (#19). In 1937, Benny Goodman charted with a top 20 version of the song. PM-546 The song was featured in at least ten films RCG including the Gershwin biopic Rhapsody in Blue (1945), the Billie Holiday biopic Lady Sings the Blues (1972), JA-128 and New York, New York (1977). RCG