Originally published in my "Aural Fixation" column on PopMatters.com on May 31, 2012. See original post here. 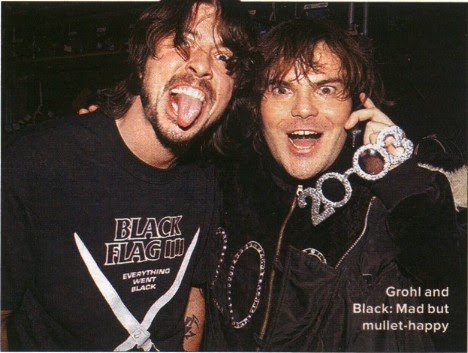 Actor Jack Black recently joined a long line of prognosticators shaking the death rattle for rock 'n' roll. However, Foo Fighter Dave Grohl says, "There will always be rock 'n' roll." If saltine crackers are any way of judging, I'm with Grohl on this. In the past week I've had Jack White’s new Blunderbuss album on repeat, much to my 6YO's dismay. He groans when I belt out the line, "I eat sixteen saltine crackers / Then I lick my fingers."; I'll take my son's reaction to be a commentary on my cringe-worthy warbling instead of an assessment of one of today's leading rockers.

If prognosticators are to be believed, my offspring's generation will never experience rock music because the genre has departed to that great musical graveyard in the sky. Of course, rock 'n' roll has survived multiple death sentences practically since birth, making cats' nine lives look like nothing. As far back as 1956, the Maddox Brothers & Rose reshaped Ray Charles’ “I Gotta Woman” into a song rechristened “The Death of Rock and Roll”.

Musing about rock’s demise has become a clichéd and surefire method for sucking readers into publications ironically dependent on the genre’s survival. I would think the bite-the-hand-that-feeds-them approach would backfire, but it must work, because I continuously cross paths with variations of the “Rock and Roll Is Dead” headline.

The latest terminal-illness pronouncement comes from Jack Black, half of the jokey-rock duo Tenacious D and an actor known for rock ‘n’ roll-roles in movies like High Fidelity and School of Rock. Black is pushed to explain the title of the D’s new song, “Rock Is Dead” in a Rolling Stone interview (“Off the Cuff: Jack Black on ‘Bernie,’ Tenacious D and the Death of Rock”, 3 May 2012). He argues no one today has the capacity to rouse audiences like the Beatles. He contends Nirvana was the last band to come close. He concedes there are still worthwhile rockers today – including the Jack White and the Foo Fighters, fronted by none other than ex-Nirvana drummer Dave Grohl. He just doesn’t believe any of today’s bands can capture the hearts of a generation.

I’m with Grohl. Black’s comments can be viewed as tongue-in-cheek, but they reveal a common belief that rock is dead because there are no bands now like there used to be. In a Musicthinktank.com article (“How Technology Killed Rock and Roll”, 17 January 2011), Corey Crossfield asserts that in the heyday of the Beatles and the Rolling Stones music had an urgency it now lacks.

Well, duh. Rock ‘n’ roll grew up. That baby who was born in the ‘50s is now eligible for AARP. Elvis was hailed as The King of Rock ‘n’ Roll because he was the first to ascend to the throne. The Beatles were at the forefront of the British Invasion because they led the takeover of the hearts of American teens. Girls wanted them and boys wanted to be them. These were landmark artists in the early days of rock ‘n’ roll precisely because they were spawned in the early days of rock ‘n’ roll.

The lack of modern-day superstars on par with The King or The Fab Four is actually an indicator of the genre’s continued influence. In the early days of any genre’s birth, a handful of names become the standard bearers. As the genre becomes more widespread, it is more difficult to stand out in the pack.

Audiences are now so saturated with avenues for discovering music that no genres or musicians can have the same level of impact as those long-ago glory days. Despite the larger-than-life personas of pop divas like Katy Perry, Rihanna, and Lady Gaga, they lack the cultural impact of the stars who launched rock.

Today’s focus on pop giants is often cited as evidence for why rock is on life support. Eric Been notes the absence of rock on the charts in The Atlantic (“10 Years After the White Stripes ‘Saved’ It, Rock Is Again in Crisis”, 5 July 2011). He points to Train’s “Hey, Soul Sister” as the only rock song in the top ten of Billboard’s Hot 100 songs of 2010. That didn’t impress The Village Voice, who deemed it the worst song of the year and “the whitest song to ever have the word ‘soul’ in it.”

An article in The Guardian (“RIP rock’n’ roll? Professor of pop reads the last rites”, 10 January 2011) professed a similar fate overseas that year. Only three rock tracks appeared in the top 100 best-selling hits in the UK. DJ Paul Gambaccini – who the article dubbed “the professor of pop” – stated, “It is the end of the rock era…That doesn’t mean there will be no more good rock musicians, but rock as a prevailing style is part of music history.”

Rock may no longer be a prevailing style or rule the roost on the charts, but that doesn’t justify reading last rites. In fact, if one wants to rely on hard numbers, look no further than the same article’s acknowledgement that rock was responsible for more than 1 out of 4 album sales during that same time frame.

Similar numbers surface when looking at top touring acts. In Billboard’s 2011 year-end issue (“2011 – The Year in Music: 25 Top Tours”), U2, Bon Jovi, and Roger Waters take the #1, #2, and #4 slots respectively. With the Eagles, Journey, and Iron Maiden also on the list, roughly a quarter of the list are rock acts.

However, even if the numbers are cast aside, it is difficult to argue that rock will never rule again just because it isn’t leading the pack right now. Black pointed to Nirvana as the kings of the hill 20 years ago. The Atlantic article pointed to the White Stripes as the saviors of rock and roll a decade ago. Who’s to say the next rock revolution isn’t right around the corner?

In the Guardian article, NME associate editor Paul Stokes says, “Music is a cyclical business… We’ve been told rock was dead before, in the late 80s, late 90s, but it came back.”

Grohl voiced a similar sentiment in his Billboard interview. He sees today’s musical climate as similar to when Nirvana exploded in 1991. The late ‘80s was dominated by over-produced, formulaic pop and then a “bunch of bands with dirty kids got on MTV and rock ‘n’ roll became huge again.”

Amusingly, within all these articles’ death sentences, no one actually defines rock and roll. History-of-rock.com describes it as “a form of popular music that evolved in the ‘50s from rhythm and blues, characterized by the use of electric guitars, a strong rhythm with an accent on the offbeat, and youth-oriented lyrics.”

However, much like the English language always has exceptions to the rule, so does rock ‘n’ roll. One can’t even get past forefathers like Jerry Lee Lewis, Little Richard, and Fats Domino before admitting some of the greats made their names tickling the ivories instead of shredding on a six-string.

The Rock and Roll Hall of Fame itself has not adopted a strict definition, a point made clear by its wide musical range of inductees. It isn’t just that, though. Their requirements for induction don’t even mention rock music. Strange but true.

This lends credence to Crossfield’s assertion that rock ‘n’ roll is more than just a musical genre. It transcends lifestyle and is practically a religion. This viewpoint frames rock more as a force which grows out of its attitude and delivery more than its style.

I subscribe to a more traditional concept, but even rock purists can’t deny how rock has crept into other genres. This lends validity to the notion that rock will never die because it will continue to weave itself into the fabric of other genre’s tapestries.

When it comes to Jack Black vs. Dave Grohl, I’ll side with the Foo man, thank you very much. When my 6YO and his peers are the dominant music-buying force in a decade or so, they may not be buying Jack White albums, but there will still be the residue of White’s saltine crackers lingering on whatever music my son consumes.