Record Store Day: Spend Your Money on Music - It's Better Than Therapy

My advice is, don’t spend money on therapy. Spend it in a record store. - German film director Wim Wenders

Over the last couple years, I’ve toiled away at a novel tied to the alternative/ college rock scene of the ‘80s. The focal point of the story is a record store, nicknamed The Pit, where the main characters worked and hung out during their college days. In 2007, Gil is headed back for a reunion – and a final goodbye – because the store is closing, unable to compete in the digital age. Each chapter is wrapped around a specific song and the memories it evokes. Overall, consider the book as sort of a High Fidelity meets The Big Chill.

So why the shameless plug? Well, Saturday, 21 April marks the celebration of Record Store Day. The idea was launched in 2007 to celebrate independently owned record stores in the United States and internationally. Celebrated the third Saturday of April, some stores have turned the day into an elaborate festival. There are special promotional releases – on both vinyl and compact disc – made available in conjunction with the day.

It’s with a certain degree of guilt which I confess my own shortcomings in supporting independent record stores over the last decade. I’ve become a digital download junkie. Any number of arguments can be made for or against this change in music technology. Downloading is more convenient, but lacks the sound quality of physical releases. Record stores can still offer a physical product and its packaging, but digital is much cheaper – even free, depending on one’s proclivity towards law-breaking.

For me, however, the change in technology has largely left me longing for the days when I made at least a weekly trek to my local used record shop. I also lived in a large enough metropolitan area to make a pilgrimage to the artsy, downtown area which sported half a dozen such establishments. I experienced the dual thrill of hitting the shops seeking out specific releases and hoping to stumble across hidden gems.

When I reflect on the stores I enjoyed the most, it’s about more than just what was on the shelves. I think of the musty/dusty smell of such places, the crates stuffed full with albums, the unforgettable personalities who staff the place. I think of, well, I’ll let my story tell the tale.


Excerpt from my novel in progress, Music Lessons from The Pit

Chelsea Drive, the road that separated my dorm from the rest of campus, also served as the town’s primary artery. I’d only been in college two weeks and had yet to explore anything much beyond the campus. Lo and behold, there were actual non-collegiate-affiliated businesses mere blocks away. I spotted a tea house and could sense the artsy vibe wafting onto the sidewalk. Actually, I think it was the smell of cinnamon.

Next door was a battered green awning with “4 the Record” in white lettering. It sheltered a large display window in which album covers were propped up on the window seat inside. Naturally blockbusters like The Police’s Synchronicity Michael Jackson’s Thriller, and the Flashdance soundtrack were featured, but there were also left-of-center features like Elvis Costello’s Punch the Clock and the Talking Heads’ Speaking in Tongues.

I tugged at the handle of the wooden door plastered with D.I.Y. flyers for bands coming to local clubs. A slight mustiness greeted me. It was as welcoming as the scent of cinnamon from the tea shop. Few things authenticate a used record store more than that smell.

A much abused hardwood floor with a noticeable warp splayed out toward shelves of cassettes and crates of records. Posters and album covers decorated the brick walls. Occasionally the corner of a poster drooped where the old masking tape had given out.

To my left was the front counter. Atop it was an old cash register, a plastic cup with incense for sale, and a sprawled open textbook. Huddled behind the book sat a thin-faced, sullen-looking guy hidden behind a pair of round, John Lennon-esque sunglasses hanging on the bridge of his nose.

The purple tint of his shades was the only bit of color about the guy. He wore dark jeans and a long-sleeved grey button shirt over a black tee. It was the quintessential, although ironic, “I’m Independent” uniform of the outsider.

The music pumping from the speakers had a “I think I’ve heard this before” kind of sound – but I couldn’t place it. I was curious enough to disrupt Mr. Black’s studies to inquire. “What’s this playing?”

He peered above his rims with an air of disgust that a nuisance customer would dare to be musically illiterate. “London Calling, by the Clash,” he sputtered.

After what I’m pretty sure was a roll of his eyes, they dropped back behind his purple shield, commanding me to go away. “Cool,” I said. “Thanks.”

Back home, my high school buddy, Rich, and I played the roles of faithful suburbanites and did most of our music shopping at the local mall. Occasionally we’d trek downtown to the handful of used-record stores within walking distance of each other. This store, however, had a charm beyond any other shop I’d seen. It wasn’t just that flipping through the old records left a coating of dust on one’s hands comparable to the residue from eating a bag of Cheetos.

The back corner had a sunken seating area, like those homes with a couple steps leading down into the living room. It was decorated with second-hand furniture that looked like it had been passed over at a garage sale. A pair of unmatched couches fervently competed for ugliest fabric. A slightly lopsided brown leather recliner leaned against one wall, propped up to keep the back of the chair from collapsing. It all wrapped around a battered wooden coffee table that looked so heavy it had seemingly been carved out of a tree trunk which had grown up right through the floor of the store. 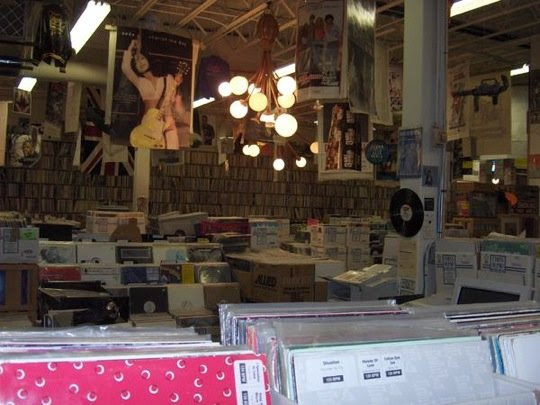 Music Exchange - Kansas City. One of the real stores where I often hung out.
Image from cratekings.com

There wasn’t an actual store in my past called “4 the Record” or “The Pit”. In fact, I went to college in a town too small to support a “real” music store. Our only option for buying music was via the dreaded Wal-Mart. However, the fictional Pit taps into my memories of Mom-and-Pop music stores I’ve visited over the years. So, in celebration of Record Store Day, I fondly recall not just the music I’ve acquired in such stores, but the cherished memories which were created, real and imagined.

For more of my writing, check out WritbyWhit.com or my Amazon store.