Sophie Tucker charted for the first time with “Some of These Days”: July 8, 1911 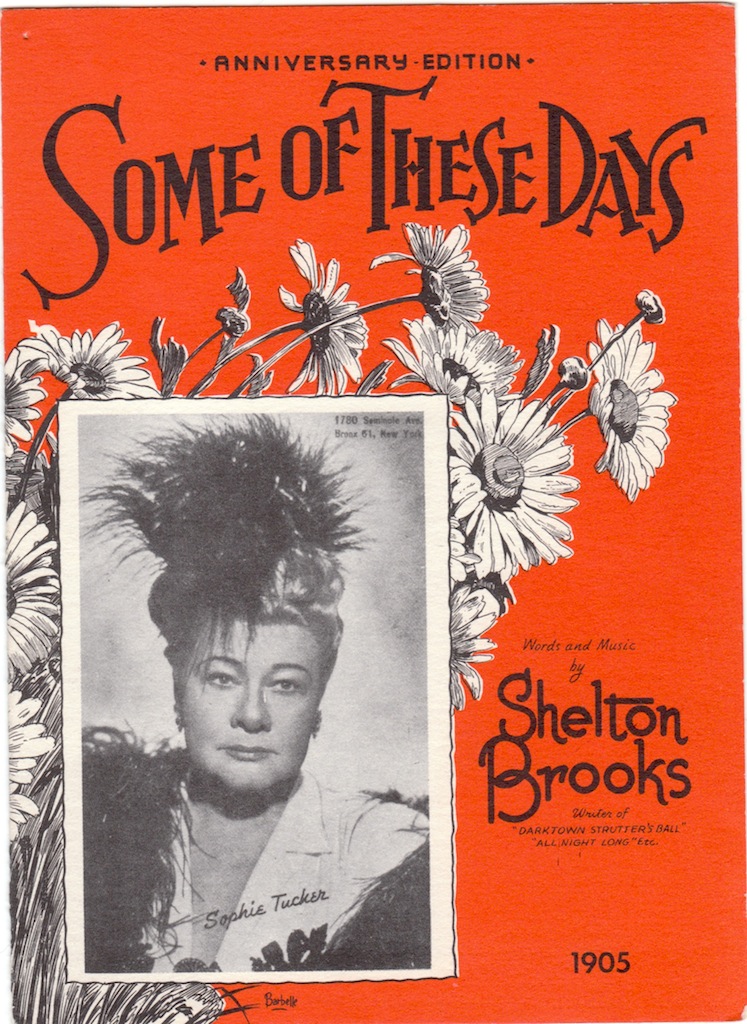 Sophie Tucker “Some of These Days”

Review: This has been called “the most important turning point in Tin Pan Alley history” because it was completely different than other popular music of the day. RCG Canadian songwriter Shelton Brooks originally composed this blues number as a waltz, but integrated jazz into the song’s loose structure. As such, jazz musicians had a wide-open pallet on which to improvise. RCG

The song served as a signature for Sophie Tucker, a vaudeville singer and comedienne known as “The Last of the Red-Hot Mamas.” Born Sonia Kalish in Russia in 1884, she got started as a singing waitress at her father’s Connecticut restaurant and became a star on Broadway, in movies, with her own radio show, and via TV appearances as part of her nearly fifty-year recording career. SS

She introduced “Days” in 1910 at Chicago’s White City Park. It became her lifelong theme song, PM showcasing “emotional poser that matched her volume and visceral stage presence.” SS Tucker had chart success with “Some of These Days” twice. Her 1911 version hit #2 and then in 1927, her rerecorded version with Ted Lewis & His Band went to the top of the charts and became a million seller. PM

Three other acts charted with the song – the American Quartet (#3 – 1911), the Original Dixieland Jazz Band (#5 – 1923), and Bing Crosby (#16 – 1932). PM Louis Armstrong, Cab Calloway, Bobby Darin, Judy Garland, and Paul Whiteman are among the others to record the song. It has also been performed in numerous movies and Broadway revues. RCG