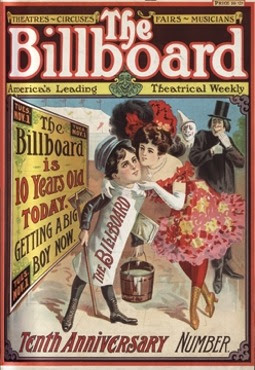 Billboard magazine is now known as the leading music chart authority, but it began life as a tool for the advertising and marketing worlds. In the fall of 1894, William H. Donaldson and James H. Hennegan EM launched Billboard Advertising in Cincinnati as a publication “devoted to the interests of advertisers, poster printers, bill posters, advertising agents & secretaries of fairs.” BB It was priced at 10 cents an issue or 99 cents a year. BB The first issue was eight pages long and featured Chicago advertising executive R.C. Campbell. EM

By 1896, Billboard expanded its coverage to the carnivals and fairs which were often advertised on billboards. EM In February 1897, the name was shortened to The Billboard EM and the magazine became more focused on a variety of live entertainment including circles and vaudeville. BB In 1909, it began covering the motion picture industry and by the 1920s was focusing on radio as well. WK For the last 70 years, the magazine has been primarily focused on the music industry. BB

Until 1961, stories of “tent shows and carny pitchmen still shared space with music stories, charts, and reviews.” EM The former kinds of stories became the focus of new publiciation Amusement Business EM (which lasted until May 2006 WK) and The Billboard was rechristened as Billboard Music Week to focus on the music angle. EM By 1963, it was shortened to Billboad. WK

The earliest music charts published by Billboard were in 1913 for sheet music sales. From 1913-1918, the magazine did a weekly list of the most popular songs in vaudeville. By 1934, Billboard regularly charted radio airplay and sheet music sales. PM In 1940, the magazine launched its top-ten-position chart on best-selling retail records. The list was based on nationwide polls of retailers. It was their first comprehensive list to combine all labels. Tommy Dorsey topped that first chart with “I’ll Never Smile Again” (“Frank Sinatra hits #1 for the first time: July 27, 1940”). BB

Today Billboard is targeted to music professionals such as record label executives, music retailers, and radio stations. WK The magazine puts out more than 100 charts a week. WK It reaches more than 100 countries and its website (Billboard.com) attracts two and a half million unique visitors per month. EM