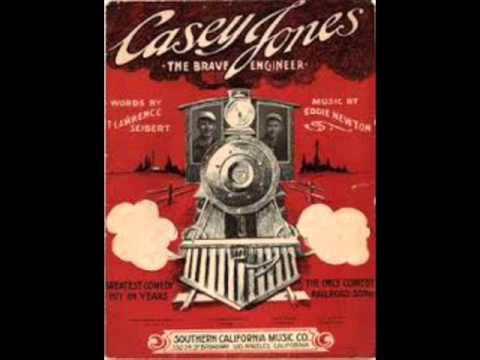 Review: Folk ballads about railroad tragedies became their own musical genre in the five centuries following the Civil War. With more than 40 versions, the song “Casey Jones” came to make its subject matter a mythological figure on par with Pecos Bill or Paul Bunyan. SS It has been called “the most notable railroad song ever” JA and, according to Pulitzer-prize-winning poet Carl Sandburg, “the greatest ballad ever composed on the North American continent.” SS

John Luther “Casey” Jones ran the Illinois “Cannon Ball Express.” His promptness was so well known that some folks set their watches by his runs. Of course, his obsession with being on time had also got him cited for numerous infractions – and was likely a factor in his fateful final run. SS On April 30, 1900, Jones was at the helm when “Old No. 3” left Memphis en route to Canton, Mississippi. Despite signs warning trains to slow down, Jones was going full speed when they pulled into Vaughn, Mississippi, and realized there were still cars on the main track. Not able to stop in time, Jones pushed a brakeman out of the cab and to safety. Then he grabbed the brakes with all his might to try to avert disaster. He couldn’t safe himself, but he spared the lives of many of the passengers.

Railroader Wallace Saunders, who knew Casey, adapted a song called “Jimmie Jones” about another railroad accident. SS Vaudeville performer Tallifero Lawrence Seibert heard the song, which had been popularized on the vaudeville circuit by the Leighton Brothers, and wrote a sketch into his act about Jones. When Seibert met Eddie Walter Newton, a ragtime piano player, the two streamlined the lyrics, reset the song in the Far West, and added a catchier rhythm. SS They published it and gained all rights to the sheet music.

With fifteen #1 songs already to his name, Billy Murray was already a superstar when he joined the American Quartet. However, it was their recording of “Casey Jones” that became the biggest of Murray’s career. It was also the biggest hit of 1910 WHC and, if the likely-inflated figure of two million sales is to be believed, the biggest American seller up to that point, passing Murray’s own “You’re a Grand Old Flag.” SS

Posted by Dave Whitaker at 7:46 AM