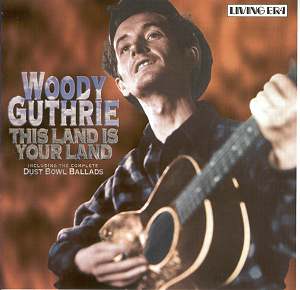 Woody Guthrie “This Land Is Your Land”

Review: Guthrie’s song is “one of the most stirring testaments to the American spirit ever put to music” SS-62 and might have been the national anthem if he was alive during the foundation of the United States. TM His song isn’t just “a pleasant ode to the beauties of the countryside” SS-62 but a conviction that America belongs to the people, not just “the poliiticans, or the corporate executives, or the priviledged class.” SS-62

Guthrie was born in Oklahoma in 1912. During the 1930s, he witnessed firsthand the effects of the Depression and the dust storms which ravaged the Great Plains. This impacted his songwriting and earned him a reputation as a spokesman for the disenfranchised. When he went to California in 1937, he forged a reputation for songs with biting social commentary in his radio broadcasts. In 1940, he went to New York to record a series of “Dust Bowl Ballads” for Victor.

Guthrie wrote “This Land Is Your Land” in 1940 in response to Irving Berlin’s “God Bless America.” He was annoyed by the song’s suggestion that all that happened to the country – including poverty and injustice – was somehow blessed by a divine being. SS-62 He set the lyrics to “When the World’s on Fire,” a traditional melody used by the Carter Family in 1930. That song, in turn, had been based on the 1928 hymn “Rock of Ages” as recorded by Blind Willie Davis. SS-62 Guthrie’s song was built on “just three simple chords and a childlike lyrical quality.” TM

In 1944, Guthrie recorded more than 170 songs for Asch Records, a small independent label in New York City. Among the songs was a slightly reworked “This Land Is Your Land,” but it didn’t see release until 1951. SS-63 By then, the song became “a leftist national anthem, sung at rallies, political events, and in schools.” NPR The song was made familiar to most Americans by the Weavers. PM-189