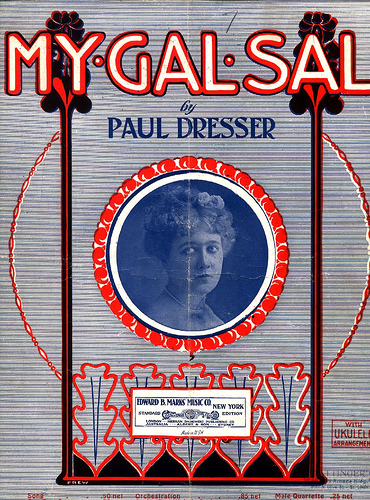 Review: Theodore Dreiser was a famous American novelist whose brother, Paul, struck out to create his own identity by changing his last name to Dresser. He had a theatre background who sang in medicine shows and with the Billy Rice Minstrels. RA

Dresser was “a gargantuan man” RA of nearly 300 pounds WK who “wrote gigantic songs.” RA He was known as an emotional person who shed tears when composing sentimental songs. People of the era loved sentimental songs, but few have endured through the decades like this one. Part of the song’s success can be attributed to Dresser’s ability to avoid clichés and infuse his songs with originality. RA It is speculated that “My Gal Sal” is about a woman with whom Dresser had a long-term relationships. Her name was Annie Brace, but her professional name was Sallie Walker. She was the proprietor of the most prominent brothel in Evansville, Illinois. WK

Dresser predicted the song would sell a million copies, but he didn’t live to see it happen. It was the last song he ever wrote RA and it was also his greatest hit. JA He died in 1906 at age 48.

Byron Harlan made a hit recording of the song in 1907, taking it to #1 and making it one of the top ten songs of the decade. PM It would have been the top song of the year if not for Harlan’s “School Days,” which spent 11 weeks at the pinnacle. WHC The Columbia Stellar Quartet hit #11 with its 1921 version of the song. PM Ted Weems & His Orchestra revived it in 1924 and Claude Hopkins & His Orchestra did the same in 1934. JA In 1942, it was used as the title for a biopic on Dresser. The song played throughout the film. JA