The Allman Brothers Band record one of the classic live albums: March 12-13, 1971 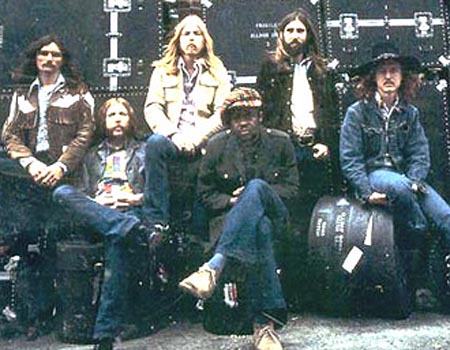 Review: “For fans of Southern rock or jam bands, this is a must: the Allmans live at the peak of their powers.” SY “The classic version of the Allman Brothers Band graced the planet for a period that was all too brief – from 1969 through…1971.” AMG3 The death of guitarist Duane Allman in a motorcycle accident at age 24 created “one of the great ‘what if’s’ of rock history, as one can only surmise what heights he might have reached.” AMG3

“The group did their best work in a live setting;” AMG3 these performances run “circles around more than 99 percent of the guitar albums ever released.” AMG2 ABB was “just beginning to generate national attention when it pulled into Manhattan’s Fillmore East auditorium for its first headlining stand in March 1971. All four shows from the run…were recorded” TM and edited into “the justifiably lauded At Fillmore East double-record set [later on 1 CD] released on Capricorn Records in the summer of 1971.” AMG3 The album “transformed this fast-rising curiosity from Macon, Georgia, into one of the truly great American rock bands of all time.” TM

“Whereas most great live rock albums are about energy,” AMG1 At Fillmore East is an “unbeatable testimony to the Allman Brothers’ improvisational skills,” RS500 how the group “connected with the crowds…and how the reciprocal energy gave birth to rock’s greatest live double LP.” RS500 It “is like a great live jazz session, where the pleasure comes from the musicians’ interaction and playing” AMG1 on “lengthy improvisational jams” NRR and “loose and free-floating solos” TM which “that the journey can be more interesting than the simple attention-grabbing refrain.” TM

The dual-guitar attack of Duane Allman on side and Dickey Betts on six-string was at “its hair-raising peak, fusing blues and jazz with emphatic force.” RS500 “When one finishes his climb to the mountaintop, the other begins…Just when that settles down, along comes organist (and vocalist) Gregg Allman, working out on a hot-sounding Hammond B3 to extend the marathon a bit further.” TM

The “album that brought the Allmans so much acclaim is as notable for its clever studio editing as it is for its performances. Producer Tom Dowd skillfully trimmed some of the performances” AMG1 “with an ear toward making the album as strong as possible for the home listener.” AMG3 Of course, even edited, “the music isn’t necessarily concise (three tracks run over ten minutes, with two in the 20-minute range).” AMG1 That may mean this is “not necessarily an ‘accurate’ documentary of the concert experience” AMG3 but “far from being a sacrilege, this tactic helps present the Allmans in their best light.” AMG1

At Fillmore East is “one of the best live albums in rock history” TM and “established the Allmans among the rock elite.” TM It serves as “the pinnacle of the Allmans and Southern rock.” AMG1

Note: The original 1971 release was a double album of seven songs, which later fit on one CD. The 1992 2-CD set The Fillmore Concerts added five more songs, including “Trouble No More” and “Mountain Jam,” which were originally released on Eat a Peach. Finally, in 2003, a 2-CD Deluxe Edition set was released that included everything on The Fillmore Concerts plus the song “Midnight Rider.”