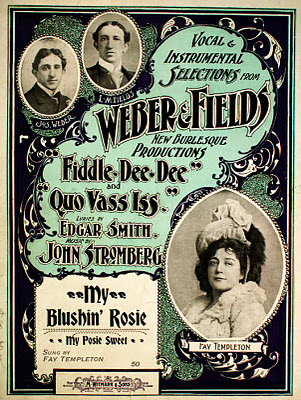 Albert Campbell was a member of the hugely successful Peerless Quartet, which yielded six #1 hits including “Let Me Call You Sweetheart” and “I Didn’t Raise My Boy to Be a Soldier”. From 1904 to 1924, that group charted more than 100 hits.


The quartet also gave Campbell a valuable duet partner in Henry Burr. They had their first chart hit in 1911 and charted 48 hits through 1925, including #1 hits like “Till We Meet Again”, “I’m Forever Blowing Bubbles”, “The Trail of the Lonesome Pine”, and five other #1 hits. From 1916 to 1922, the pair also recorded as The Sterling Trio with John Meyer, another member of the Peerless Quartet, and racked up another 13 hits.


However, before any of those endeavors Campbell was a tenor balladeer whose recording career launched in 1897 on Berliner Records. He didn’t rack up many hits – he only charted nine times as a solo act prior to his run with the Peerless Quartet – he still had some success, most notably with #1 songs like “My Wild Irish Rose” and “Ma Blushin’ Rosie”.


The latter marked Campbell’s greatest success as a solo act. Fay Templeton introduced the song in the 1900 Weber and Fields show Fiddle-Dee-Dee and by year’s end, Campbell charted with his recording of the song. S. H. Dudley hit #3 with his 1901 recording of the song. While it didn’t chart, Al Jolson also recorded what today is probably the easiest version of the song to find. He sang it in 1946’s The Jolson Story and 1949’s Jolson Sings Again.