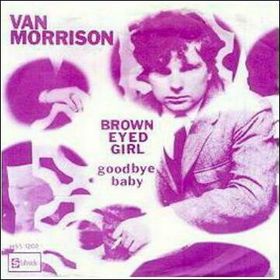 In the mid-’60s, Van Morrison had brief fame with Irish R&B band Them with hits like “Gloria,” “Here Comes the Night,” and “Baby Please Don’t Go.” However, by 1966 he was a 21-year-old has been living back at home with his parents. BBC Bert Berns, Them’s American producer and the owner of Bang Records, still believed in Morrison and flew him to New York for some recording sessions in March 1967. BBC After signing a contract which, according to biographer Clinton Heylin, Morrison probably still regrets, WK Van recorded eight songs intended for use as four singles. WK

Hit records weren’t at all what Morrison was interested in and consequently most of what he recorded for Bang was decidedly uncommercial. TB Hits, however, were exactly what Berns had in mind and he was determined to fashion a hit out of “Van’s introspective and personal material.” BBC

He found it with “Brown-Eyed Girl,” the song now generally considered to be Morrison’s signature song. WK In the history of rock music, teen lovemaking has possibly never been “more perfectly captured or more lovingly celebrated.” WI It is, though, more than just a song about sex and youth; it is also “very wonderfully a song about singing.” WI

Van sings the “infectious pop melody with such effervescence” MA it is difficult to grasp that the “gloomy...genius” MA despised its success. However, as he told Rolling Stone in 1970, “It put me in some of the worst joints I ever worked...It just put me in some awkward positions. Like lip-syncing to the record on a television show. I can’t lip-sync.” RS500

His next time out, Morrison effectively shut the door on mainstream success with Astral Weeks, a critically-acclaimed, but “deeply personal acoustic song cycle that sold practically nothing.” RS500