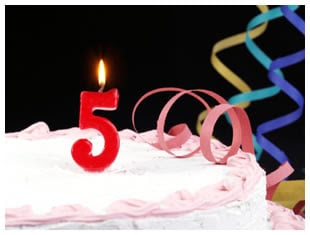 Today marks the fifth anniversary of the DMDB blog. It has come a long way in five years! That first post, entitled “How to Get into the Rock and Roll Hall of Fame”, mocked that institution’s biases with five observations about what will (or won’t) lead to canonization in Cleveland. I ripped on the organization for failing to induct acts like Kiss, Rush, Genesis, and Alice Cooper. All are now in.

I put up a whopping 13 posts in 2009 and another 14 in 2010. About mid-way through 2011, I changed the focus of the blog from essays on music-related topics to more objective snapshots of musical history tied to that particular day. The paid off in spades. Prior to the thematic switch, my biggest month was September 2009 with 422 hits. I more than doubled that number in June 2011 with the new approach. I noted in a 2012 post, “The History of the Dave’s Music Database Blog”, how the blog had mustered 31,000 hits. I was quite proud. It has grown by more than ten times that in the last two years. By the end of January the blog should log 400,000 views.

I’m not sure how I’ve been so lucky to get so much attention to my blog, but I’m grateful to all the fans. Thank you for reading!