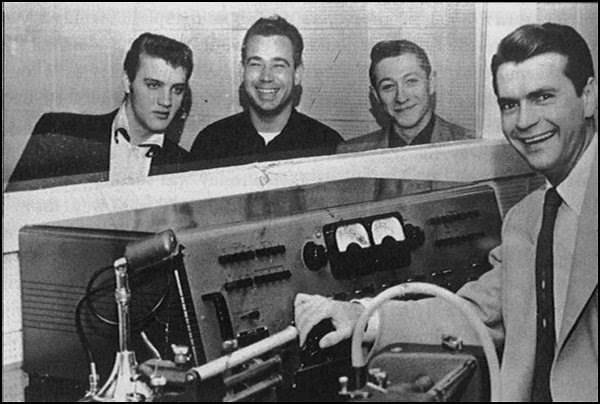 Elvis Presley’s Sun recordings from July of 1954 are considered by some to be the beginning of rock and roll. Many historians would argue that rock and roll’s origins predate Elvis and can’t be tied to one event or recording, but Elvis’ brief tenure with Sun is indistibutably monumental in the development of rock and roll.

The July 5-6 session was not the future King of Rock and Roll’s first time to record with Sun. Nearly a year earlier, he paid $3.98 to the Memphis Record Service, now commonly known as Sun Studio, to record “My Happiness” and “That’s When Your Heartaches Begin.” In January 1954, he returned to record “I’ll Never Stand in Your Way” and “It Wouldn’t Be the Same Without You.”

That May, Sun Studio head Sam Phillips found a demo of “Without You” and, in a search for a white performer who could sing blues and boogie-woogie, he brought Elvis back in the studio. Local Western swing musicians Scotty Moore (electric guitar) and Bill Black (slap bass) rehearsed songs on July 4 and met at Sun the next couple days to record a few songs.

Scotty Moore talks about the sessions

The first song they recorded was “I Love You Because.” After a few more country-oriented songs, Elvis started playing around with Arthur Crudup’s blues song “That’s All Right, Mama.” Also among the songs they recorded were a faster version of bluegrass musician Bill Monroe’s “Blue Moon of Kentucky” and “Harbor Lights.”

“Mama” and “Kentucky” were released as a single before the end of the month and garnered some success in the South. The trio would record at Sun through 1955 before Phillips sold Presley’s contract to RCA for a then-record $35,0000 to $40,000, depending on the source. It was in 1956 that Elvis would claim the throne as the King, but he’d established himself as royalty via those 1953-55 Sun recordings.