Vernon Dalhart
“The Prisoner’s Song” is a sad ballad about a prisoner being transferred between jails and pondering his sweetheart and ‘a pillow of stone.’” RCG It was recorded on August 13, 1924, but didn’t chart until March 21, 1925. The song’s significance lies in its role as a signal to record companies of the commercial viability of country music. It moved, by some estimates, 7 million copies plus another million in sheet music. That ranks it as one of the world’s top 100 all-time bestsellers. Its twelve weeks at #1 (in two separate chart runs) also puts it in the list of the biggest #1 pop songs in U.S. chart history. The song also ranks as one of the top 1000 songs of the 20th century according to Dave’s Music Database and is in the Grammy Hall of Fame. 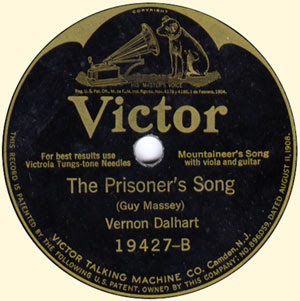 There is some debate over the song’s authorship. Dalhart copyrighted the song in the name of his cousin, Guy Massey. He gave Massey 5% of the songwriting royalties and took the other 95% himself. WK Dalhart heard the song from Guy, who sang it while staying at Dalhart’s home. However, Guy reportedly heard it from his brother Robert Massey, who may have heard the song while doing time in prison. WK It has even been suggested that Robert F. Taylor carved the lyrics into a county jail cell wall in Blakely, Georgia. WK Regardless of authorship, the publishers were happy to hype the song as written by a jailbird. RCG Nat Shilkret fought for authorship as well. He was the A&R man over the country division of Victor Records and claimed he had to rewrite the music because what Dalhart brought in was unusuable. WK Resources and Related Links: