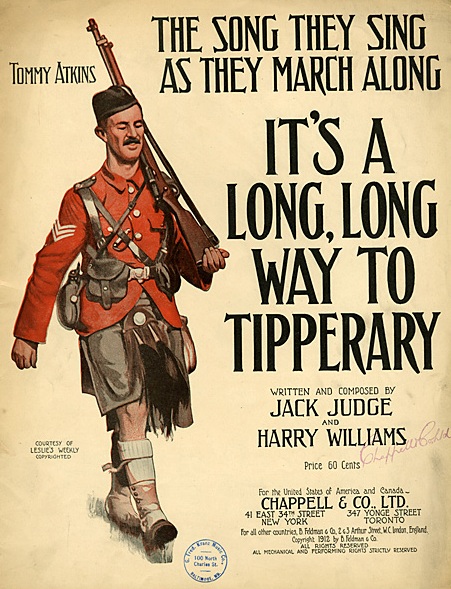 Review: “Tipperary” was written in 1912 as a British music hall song by Jack Judge (and also credited to Harry Williams). Judge’s parents were Irish and his grandparents hailed from Tipperary, Ireland. During World War I, Daily Mail correspondent George Curnock witnessed Irish troops singing it while marching. It caught on with other units of the British Army as a lament on longing for home and eventually gained worldwide appeal. WK

Florrie Forde first sang the song on the British music hall stage in 1913 and the following year the song appeared in two Broadway musicals, Chin-Chin and Dancing Around. That year, the American Quartet were the first to chart with the song in the U.S., hitting #1 for seven weeks. However, it was Irishman John McCormack who had the most successful version – an eight-week chart-topper which hit the charts in early 1915 PM and went on to become the biggest song of the year. WHC

McCormack, who has been called “the most famous Irish tenor of all time,” PM made his operatic debut in Italy and became an American sensation in 1910. He first hit #1 in 1911 with a pair of songs, “I’m Falling in Love with Someone” and “Mother Machree.”

Charles Adams Prince’s Orchestra and Albert Farrington also released versions of the song in 1915, peaking at #2 and #8 respectively. The song was featured in the the film On Moonlight Bay (1951), the musical and film Oh! What a Lovely War in the 1960s, and the musical Darling Lili (1970), which starred Julie Andrews. The German U-boat crew sings it to boost morale in the film Das Boot (1981). On the final episode of TV’s Mary Tyler Moore Show, the newsroom staff sing the song as they march off screen. The song also features in the television special It’s the Great Pumpkin, Charlie Brown when Snoopy, pretending to be a World War I flying ace, dances to a medley of the era’s tunes as played by Shroeder. WK