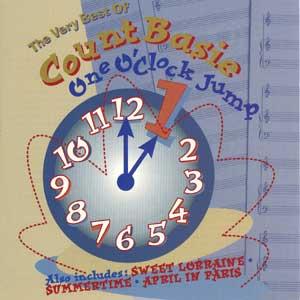 Count Basie and his Orchestra crafted this instrumental jazz “landmark of the big band Swing Era” NRR around a head arrangement, an approach in which a song was developed through rehearsal and memorized without being written down. NRR The approach let musicians focus on the rhythmic drive NRR which was the main thrust of Basie’s and other Kansas City dance bands. Such songs were known as “stomps” and “shouts” or, in this case, a “jump”. CR

The approach also allowed soloists a lot of freedom. In “One O’Clock Jump”, extraordinary players like Lester Young, Herschel Evans, and Buck Clayton are allowed a showcase their interplay of brass and reeds. NRR

The song grew out of a rearrangement of Fats Waller’s “Six or Seven Times” CR and became a song originally called “Blue Ball”, CR which showcased the band’s ties to the blues. However, when Basie & crew were scheduled to perform the song for a radio broadcast, the announced balked at the risqué name so Basie retitled it “One O’Clock Jump”. CR

Basie was the first to chart with the song in 1937. The following year, Harry James and Benny Goodman had top 10 versions with it. However, the song has become known as “Basie’s signature theme, and the band played it at the end of their performances for more than 50 years.” NPR As a demonstration of this instrumental’s staying power and ability to cross genres, country group Asleep at the Wheel won a Grammy in 1978 for best country instrumental performance. TY Neil Peart, the drummer with progressive rock group Rush, used it to conclude his solos in concert from 2002 to 2004. WK

Posted by Dave Whitaker at 2:51 PM