Casey Kasem: End of the Countdown 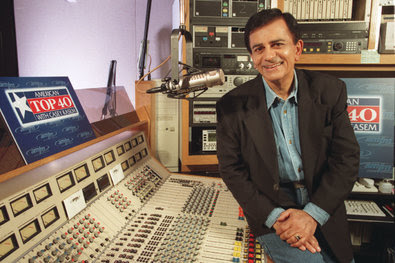 My parents drug me to church every Sunday morning, but my real religion came when we got home. I raced to my bedroom, flipped on the radio, and allowed American Top 40 to convert me into the music-list junkee I am today. Had my parents wanted someone at whom to point a finger of blame, they need look no farther than Kemel Amen Kasem.

Better known as Casey Kasem, he was the voice of American Top 40. Based on Billboard magazine’s Hot 100 singles chart, the radio show counted down the hits every week. Casey peppered his broadcasts with biographical tidbits, trivia, and the simultaneously cheesy and touching long-distance dedications. That voice which challenged listeners to “Keep your feet on the ground and keep reaching for the stars” is now permanently silent. Kasem died on June 15, 2014, at age 82. He is survived by his wife, Jean Thompson (married 1980-2014), four children, and four grandchildren. He was diagnosed in 2007 with Lewy body dementia, a condition which left him unable to speak.

He was born on April 27, 1932, in Detroit, Michigan where his Lebanese-immigrant parents worked as grocers. He had his first taste for radio covering sports at Detroit’s Northwestern High. When he went to Wayne State University for college, he voiced children on radio programs. In 1952, he was drafted by the Army to serve in Korea, where he worked as a DJ and announcer for the Armed Forces Radio and Television Service.

Once back in the states, he jumped around in various radio jobs in Detroit, Buffalo, New York, Cleveland, San Franciso, Oakland, and Los Angeles. He launched American Top 40 on July 4, 1970 and served as its host until 1988, as well as a second stint from 1998 to 2004. He also worked as a voice actor, most notably as Shaggy from Scooby-Doo cartoon and Robin in Super Friends.