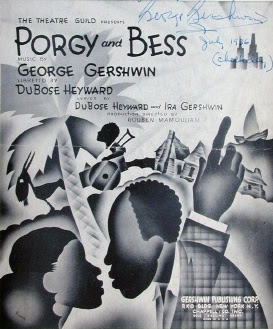 George Gershwin saw a reading of the DuBose Heyward novel Porgy in 1926 and a stage adaption the following year. Other commitments delayed his vision of the story as an opera, but he finally tackled it, with his brother Ira contributing lyrics, in February 1934. AC The story deals “with African American life in the fictitious Catfish Row (based on the real-life Cabbage Row) in Charleston, South Carolina, in the early 1920s.” WK The opera tells the story of a crippled black man named Porgy who lives in the slums and tries rescuing Bess from a pimp and drug dealer.

Porgy and Bess was given a “Boston tryout on September 30, 1935, [at which it] garnered enthusiastic notices and a 15-minute ovation, but also frightened its producers by playing over three hours.” AC Gerswhin’s edited version opened on October 10 at New York’s Alvin Theatre. AC It “featured an entire cast of classically trained African-American singers – a daring and visionary artistic choice at the time.” WK “Gershwin considered it his finest work, but it was not widely accepted in the United States as a legitimate opera until 1976 when the Houston Grand Opera production of his complete score…established it as an artistic triumph. The work is now considered part of the standard operatic repertoire and is regularly performed internationally. Despite this success, the opera has been controversial; some, from the outset, have considered it racist.” WK

Porgy and Bess saw multiple stage revivals, including ones in 1942, 1952, 1976, 1983, and 2006. A cast album featuring original performers didn’t occur until 1940. Porgy and Bess also took on a life beyond stage production. Louis Armstrong and Ella Fitzgerald recorded an album of its songs in 1957; Miles Davis recorded his take on it in 1958. Others who recorded it included Pearl Bailey, Harry Belafonte, Diahann Carroll, Ray Charles & Cleo Laine, Sammy Davis Jr. and Carmen McRae, and Percy Faith. A soundtrack of the movie version of Porgy and Bess appeared in 1959.” WK

Resources and Related Links:
at September 30, 2012