June 22, 1961: The Beatles make their first studio recordings. At that time, the Beatles consisted of – as picture above, left to right – Paul McCartney, John Lennon, Pete Best, and George Harrison. Polydor Records’ Bert Kaempfert asked them to record as the backing band for an English rock and roll singer named Tony Sheridan. Sheridan knew the band from working with them at the Top Ten Club in Hamburg, Germany.

The recording sessions took place not at a recording studio, but on a converted stage at the Friedrick Ebert Halle school in Hamburg, Germany. BB There is some debate as to which recordings actually featured the Beatles, but it is generally agreed that they were present on new arrangements of “My Bonnie Lies Over the Ocean” and “When the Saints Go Marching In”, known respectively as “My Bonnie” and “The Saints”. They also recorded a Sheridan original called “Why (Can’t You Love Me Again)”, a cover of Hank Snow’s “Nobody’s Child”, and Jimmy Reed’s “Take Out Some Insurance on Me, Baby” (sometimes known as “If You Love Me, Baby”). In addition, the Beatles recorded two songs by themselves – “Ain’t She Sweet”, with John Lennon on lead, and “Cry for a Shadow”, an instrumental. An eighth song, a version of “Sweet Georgia Brown”, was also recorded at a later date. Sheridan has reported that they also did “Rock and Roll Music”, “Kansas City”, and “Some Other Guy”. FT 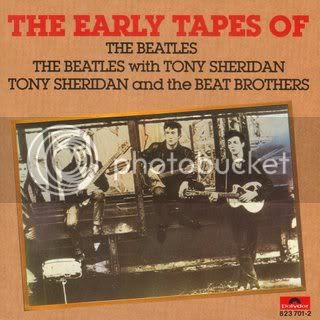 The first single from the sessions was “My Bonnie”/“The Saints”. It was credited to Tony Sheridan and the Beat Brothers; the word “Beatles” sounded too much like “peedles”, German slang for “penis”. It was released in two versions in October 1961, hitting #5 BB and selling 180,000 copies in Germany. FT

The single was released in 1962 in the U.K. and U.S., but didn’t chart until after the Beatles had already hit #1 and the song was re-released. However, it did grab the attention of Brian Epstein, a record store manager in Liverpool. With the Mersey beat sound catching on, the Beatles were becoming increasingly popular. Epstein ordered copies of the single and later sought out the Beatles, famously becoming their manager. Once the Beatles became popular, the songs resurfaced and have been since been released on multiple singles and albums, both officially and unofficially. The most elaborate collection is Beatles Bop – Hamburg Days, but many other cheaper collections exist. 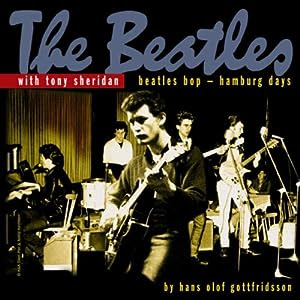 For more information, check out The Beatles’ DMDB page and their entry in the DMDB music makers’ encyclopedia.