Garth Brooks’ 1989 self-titled debut sported four top ten country singles, two of which hit #1. His second album, 1990’s No Fences, made him the biggest superstar country music had ever known. The album 17 million in U.S. sales alone ranks it in the top 100 best-selling albums of all-time.

The album’s lead single, “Friends in Low Places”, was the first of four #1 country songs off Brooks’ sophomore effort – and the biggest hit of his career. He found the song through writers Bud Lee and DeWayne Blackwell. Brooks was working as a shoe salesman in Nashville and looking for his big break when the songwriting team came in to buy boots. They agreed to let Brooks record some demos for them. CL The last one, “Friends in Low Places”, came after Brooks had landed a deal with Capitol Records and was about to release his debut album. Brooks was taken enough with the song to record it a year later when he was readying his second album. 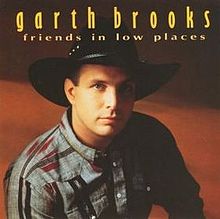 In the meantime, Mark Chesnutt recorded the song for his Too Cold at Home album, but it wasn’t released as a single. Once Brooks laid down his version, though, it became one of the top 100 country songs of all-time according to Dave’s Music Database. The DMDB also ranks it as one of the top 1000 songs of the 20th century. “Friends” also took home Single of the Year honors from both the Academy of Country Music (ACM) and the Country Music Association (CMA).