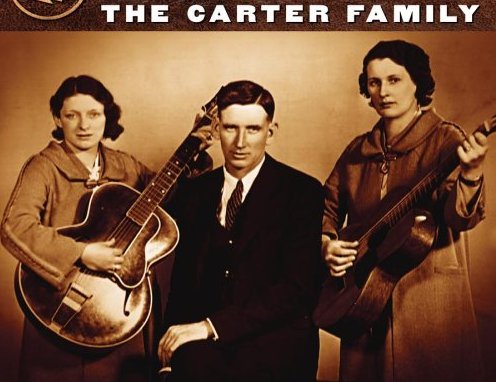 Comprised of Alvin Pleasant (A.P., aka “Doc”) Carter, his wife Sara, and her cousin Maybelle, the Carter Family has been called “the first family of country music.” TM They gave the genre its foundation NRR by defining its sound, as well as bluegrass, in the first decades. TM In his book, The Stories Behind Country Music’s All-Time Greatest 100 Songs, Ace Collins asserts that it is “Wildwood Flower” specially which serves as “the cornerstone on which country music finally built its own identity.” CL

Before 1927, country songs were typically recorded as novelties by artists who “knew more about Broadway than they did about hillbillies.” CL However, the Carter Family popularized old folk and mountain songs with their own Appalachian spin. TM In addition their close harmony singing, the Carter Family brought a unique picking style to the genre. NRR The approach introduced more instrumentation to a format which had been vocally driven. Maybelle played the guitar by using her thumb to pick chords on the low strings while she played lead on the high strings. CL

On “Wildwood Flower,” that is apparent in “the song’s 12- (or so) note guitar part” TM recorded on Maybelle’s 19th birthday. TM The song is credited to A.P. Carter, who did not write it, although the Carter Family certain should be credited with their arrangement and popularization of the song. SF In actuality, the lyrics originated from J.P. Webster and Maud Irving’s “I’ll Twine Mid the Ringlets.” SF The tune, which is about a young woman abandoned by her beloved, dates to the 1860s. According to Michael Koppy, an American musicologist, the song’s copyright expired in 1902 and should have stayed in the public domain. SF

Like many of the songs recorded by the Carter Family, this “part ode, part folktale” CL was passed down from generation to generation without the lyrics ever being written down. In the hands of Sara and Maybelle, who have both sung the song, vowels were flattened so “hair” becomes “herr” and “flower” becomes “flarr.” TM The confusing lyrics and unexplained symbolism make the song peculiar, but the melody has kept the song popular for years. NPR

Resources and Related Links:
Posted by Dave Whitaker at 5:39 PM