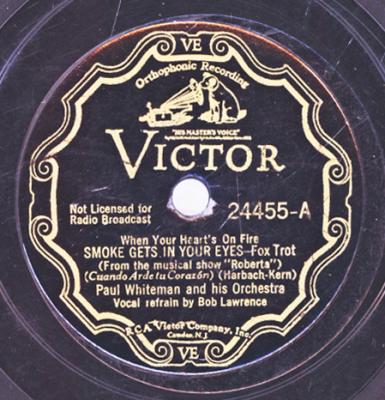 Paul Whiteman with Bob Lawrence “Smoke Gets in Your Eyes”

Review: According to Otto Harbach, Jerome Kern originally composed “Smoke” for 1927’s Showboat. It was supposed to be an uptempo instrumental which accompanied a tap dance routine while scenery was changed, LW-67 although another account had the song originating as a march for a radio program which never happened. TY-70 Harbach suggested refashioning it as a ballad, at which point it was left out of Showboat. LW-67

The song is filled with challenges – such as the octave-and-a-half range for singers and, for players, a surprising key change at the bridge. MM-181 In addition, Harbach works in unlikely words like “chaffed” and “deride” – all leading toward the song’s conclusion about the end of a love affair – and the final line when the title is mentioned for the first time. MM-181

Roberta was remade in the 1950s as the new musical and movie, Lovely to Look At. LW-67 Then, in 1958, the doo-wop group the Platters took their million-selling version to the top of the US and UK charts, showcasing “the song’s ability to both transcend time and lend itself to varied interpretations and still remain fresh.” LW-67 The Hit Parade Hall of Fame website neither indicates how the Hall came about nor what the criteria are for induction. The Wikipedia page describes the Hall as “an association which highlights musical performers who have been responsible for big hit records over the years.” It also suggests artists, such as Bing Crosby and Frank Sinatra, are ignored by the Rock and Roll Hall of Fame but honored by the Hit Parade Hall of Fame. A nominating committee selects acts which have at least two top ten records, in any genre, according to Billboard or Cashbox. After nominations are unveiled, the public is allowed to vote. Nominees are revealed in the second week of February and inductees are named in the second week of January. Here are the inductees and nominees from 2007 to 2015.

Van & Schenck “Carolina in the Morning”

Review: The song was introduced by Vaudeville performer William Frawley and then quickly added to the musical revue The Passing Show of 1922, RCG where it was sung by Willie and Eugene Howard. JA-33 The show opened on September 20, 1922 at the Winter Garden Theater and closed on December 2, 1922 after 85 performances. SB

In addition to Van & Schenck’s #1 recording of the song, three other versions charted in 1923 – Marion Harris (#4), Paul Whiteman (#5), and the American Quartet (#8). Al Jolson revived it in the movie The Jolson Story (1946) RCG with a version which outsold the original. WK It emerged again in the 1951 Gus Kahn biopic I’ll See You in My Dreams. JA-33 Danny Winchell charted with it in 1952, making it to #30. Bing Crosby, Jimmy Durante, Benny Goodman, Judy Garland, Bill Haley & His Comets, Danny Kaye, Dean Martin, and Dinah Shore have all recorded it. SB Frawley himself sang the song on two different television shows on which he was a star – I Love Lucy and My Three Sons WK and Dick Van Dyke and Mary Tyler Moore performed it on The Dick Van Dyke Show. WK The song has also been used frequently for Warner Brothers’ Merrie Melodies and Looney Tunes cartoons. WK

Both North and South Carolina lay claim to this tune which deals with longing to “return home where ‘The dew is pearly kinda early in the morning’.” RCG “The southern drawl is alluded to by rhyming ‘Carolina’ with ‘finer.’” RCG

Amusingly, the song was written by a New Yorker (Walter Donaldson, born in Brooklyn in 1893) and a German (Gus Kahn, born in Coblenz in 1886). Donaldson wrote more than 600 songs; his best known came in the years between World War I and II. PS Kahn’s family came to the United States in 1891 and settled in Chicago. He had his first song published in 1907 and then wrote lyrics for vaudeville performers in Chicago and New York before moving to California in 1933 to write for movies. Some of his best-known songs are “Pretty Baby” (1916), “Makin’ Whoopee” (1928), and “Liza” (1928). PS

David Bowie: In Memory of the Chameleon

This is an adapted version of content I originally posted on January 8, 2012 in honor of David Bowie's birthday.

Rock's most celebrated chameleon, David Bowie, is dead at 69 after an 18-month battle with cancer. Born on January 8, 1947 in Brixton, London, England, Bowie left one of the most indelible stamps on rock history as he traversed through a variety of personas from Ziggy Stardust to the Thin White Duke. Rather than rehash the same biographical information which can be found at any news outlet, I'll reflect on how this musician has heavily shaped my personal tastes.

According to music-map.com, some of Bowie’s closest musical relatives are contemporaries like Lou Reed and Iggy Pop and their bands Velvet Underground and The Stooges respectively. However, Bowie’s reach in shaping the music of the late ‘70s and early ‘80s shows up quickly with the who’s who list of punk and alternative rock bands like Roxy Music, The Ramones, The Clash, Kraftwerk, Talking Heads, Bauhaus, Joy Division, The Cure, The Smiths, Depeche Mode, and The Pixies.

I didn’t “discover” David Bowie until the early ‘80s. I was in high school when “Let’s Dance” hit #1 and presented Bowie as another pop icon who looked good on MTV. I didn’t think that song was all that special, but still enjoyed it and most of the top 40 hits that followed that decade, including “China Girl”, “Modern Love”, “Blue Jean”, his cover of “Dancing in the Street” with Mick Jagger, “”Day-In, Day-Out”, and “Never Let Me Down”.

As I’ve often argued, though, sometimes it’s the most commercial and least-interesting stuff from an artist’s catalog which proves to be the springboard for discovering that artist at his or her best. I moved from Bowie’s ‘80s pop output to classic rock staples like “Changes”, “Fame”, “Space Oddity”, “Rebel Rebel”, “Ziggy Stardust”, “The Jean Genie”, “Young Americans”, and “Golden Years”. Eventually, though, I dipped further into Bowie’s '70s albums and became enthralled with the man who perpetually reinvented his musical identity, working his way through roles as diverse as British folk troubadour, alien rocker, robotic soul singer, and German electronica maven.

Now I can proudly boast to owning all of Bowie’s official studio releases (25+) as well as a slew of live albums and other rarities. I seem to be one of the few who loved his late ‘80s/early ‘90s foray into noise rock with Tin Machine and I thought his 1995 Outside album deserved to be touted as one of those albums which ranked up there with Nine Inch Nails for shaping industrial rock.

Like many Bowie fans, I mourn a world where one can never again say, "Have you heard the new Bowie album?" R.I.P. to rock's greatest chameleon.